A Mammoth restaurant owner, severely injured in a snowmobile accident, is slowly working toward recovery. 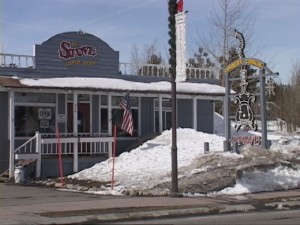 Glenn Taylor has owned The Stove for a number of years.

On March 5, Glenn Taylor, the owner of Perrys Pizza and The Stove restaurants, suffered severe injuries while snowmobile riding with friends east of Highway 395 near the south June Lake junction. Riding in flat light, Taylor’s snowmobile became air-borne when he hit an unseen depression in the snow on a snow covered portion of the Pumice Mine Road.

Sheriff officials said that his friends were able to call for help, and Mono County Paramedics, the June Lake Fire Department and the Mono County Sheriff Search and Rescue Team responded. He was stabilized at the scene and then transported by a snowmobile rescue toboggan to a waiting ambulance. Paramedics transported him to Lee Vining airport where a Care Flight helicopter flew him to Renown Medical Center in Reno.

Taylor is now out of intensive care. There were concerns that Taylor might be paralyzed, but the latest report is that he is in rehabilitation and will walk again.

We work to provide daily news to all of the Eastern Sierra, in the tradition of Eastern Sierra News Service and the Sierra Wave. We bring you daily happenings, local politics, crime, government dealings and fun stuff. Please contact us.
View all posts by News Staff →
Renewed Push for Digital 395 Project
Police Continue Robbery Investigation and Seek Public Help