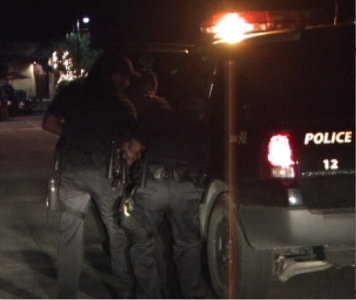 Week-ends look something like this for Mammoth Police Officers. This arrest took place last year.

Monday we reported on the challenges that face Mammoth Police on week-ends – big crowds, alcohol flowing last calls and sometimes fights. This past week-end produced more of the same, but this time the arrest took a serious struggle and three officers to overcome an unruly drunk, according to Mammoth Police.

The story started in the early morning hours Sunday. Officers Gladding and Torres saw two suspicious people in the area across from Whiskey Creek off Minaret Rd. Police said they arrested one man lying in the snow, Courtland Earickson, 18, of Orange, for public intoxication.

A second 18-year-old, according to police, struggled hard with officers. Officer Art Torres caught up with Travis Beigle, 18, also of Orange, and fought with him to bring him under arrest. Officer Gladding ran to help. They both struggled with the large man, over six feet tall and 310 pounds. Both officers held onto his back, but Beigle got up and kept fighting.

Police said CHP was out of the area and Mono County deputies were no longer on duty. Off-duty Mammoth Police officers came to the rescue. Sergeant Marc Moscowitz, Officer Jesse Gorham and Officer Dan Casabian were off duty and heard the radio traffic as they drove home. They turned around and rushed to the scene. Gladding, Torres and Casabian brought Beigle under control and into handcuffs. One officer received minor injuries in all of that.

There’s more. Another call came in about a stolen vehicle. Two officers stayed with the first two arrestees while the other three officers headed to the Village. They performed what they called a high risk take down of Leonard F. Hirsh III, 33, of Los Angeles, who was arrested for vehicle theft and driving under the influence of alcohol. MLPD recovered the stolen vehicle and returned it to the owner.

Yet another police officer came on duty to take a total of six arrestees to Bridgeport before working a day shift. Police said this incident was the third physical confrontation between officers and violent subjects, causing minor injuries to two officers and the second in-progress vehicle theft.

We work to provide daily news to all of the Eastern Sierra, in the tradition of Eastern Sierra News Service and the Sierra Wave. We bring you daily happenings, local politics, crime, government dealings and fun stuff. Please contact us.
View all posts by News Staff →
Climbing guide Doug Nidever hospitalized in Reno
Restaurant owner offers reward to help solve crime