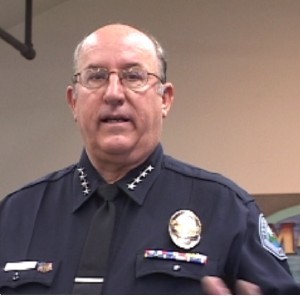 had good things to say about the Mammoth Lakes Police Department which, as the Chief admits, had gone through a rough couple of years before his arrival.

In a press release from Mammoth today, Town Manager Rob Clark is quoted as saying that the Town council has been “unanimous in their praise for Chief Watson and the professionalism that he has promoted in the department since he arrived last summer.”

Chief Watson had solid compliments for his department: He said he has now been here long enough to get a pretty good view of the caliber of personnel and the way they provide service to the Town. “Overall,” said the Chief, “I’m very pleased and impressed by the caliber of professionalism and dedication by the officers.”

Before Watson’s arrival, the police department had been plagued with a grand jury investigation, court incidents and bad public relations generally. Now, Chief Watson says, “We’re on road to putting that all behind us. The feedback I get from residents is that the officers’ reputation is good and getting better. Officers are appreciated for the hard work they do. I think things are going in the right direction.”

Chief Watson sees the resort town of Mammoth as a new and enjoyable challenge for him. His entire career was spent at LAPD and South Pasadena as Chief. “It’s a different approach from urban areas,” he said. Chief Watson said he never dealt with bears before either. “This has all made it interesting and sort of rejuvenated my interest.”

When he first came to Mammoth last summer, Chief Watson said he did two things – bought his wife, Kathy, an all wheel drive vehicle and signed a lease on a home. “I enjoy living in Mammoth,” said Watson, “and have made some good friends.”

We work to provide daily news to all of the Eastern Sierra, in the tradition of Eastern Sierra News Service and the Sierra Wave. We bring you daily happenings, local politics, crime, government dealings and fun stuff. Please contact us.
View all posts by News Staff →
Your next pets – Gracin and Shiloh
Mono DA holds off on medical marijuana position