For some 14 years, Dan Wright of Mammoth has guided groups around the world for projects with Habitat for Humanity. 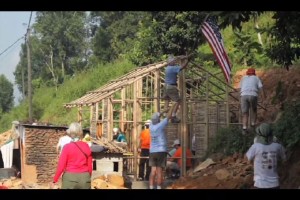 Edited film by Marc Margulies will air on TV33.

Recently, a group of some dozen Mammoth Lakes people joined with scores of other volunteers to build homes in Pokhara, Nepal.

Marc Margulies of Mammoth videotaped and edited a piece on this remarkable trip. We will air it in its entirety on Thanksgiving Day in place of our newscast. Margulies said that the project involved building 40 houses in six days with 450 volunteers from countries all over the world, including the U.S.

Margulies said that the women of Pokhara chose forty families to receive the newly built homes. People in that area live very modestly and in extreme poverty. Even so, the families selected agreed to pay something in exchange for the small, 300 square-foot homes with shed roofs and three rooms.

In Marc’s film, you will see the gratitude of the Nepalese and the heart warming experience of the Mammoth residents and other volunteers who met people on the other side of the world and built homes for them.

We work to provide daily news to all of the Eastern Sierra, in the tradition of Eastern Sierra News Service and the Sierra Wave. We bring you daily happenings, local politics, crime, government dealings and fun stuff. Please contact us.
View all posts by News Staff →
Last Minute Public Discovery Leads to Extended Deadline
Inform the Public on Commission Vacancies