By Deb Murphy on April 12, 2021 in General Misc. Stories, Town of Mammoth Lakes 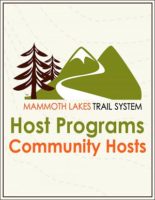 Mono County’s Sheriff Ingrid Braun warned of a massive exodus of people escaping Covid-ridden Southern California for the serenity of the Eastern Sierra last year. Short of spike-strips on Hwy. 203, there was not much that could be done to stop it. But, now the Town of Mammoth Lakes is planning to mitigate the second wave of Southern California residents, or at least try to.

At last week’s Mammoth Council meeting, Town Manager Dan Holler was kind in his analysis of one of the issues: folks “dispersed camping” in the Vons parking lot. “These people are used to congregating in large numbers to party,” he explained. When Mammoth Police Department tries to move them along, they do just that—they move to another parking lot. Bless their little hearts, they just don’t realize the Eastern Sierra isn’t just like the Strand that runs through the South Bay beach towns.

While all the issues couldn’t be dealt with in one Council meeting, the members approved Holler’s solutions along with funding to the tune of $400,000 to support the effort.

Near the top of the list were additional trash bins and porta-potties, specifically at trail heads.

Additional staffing included two part-time Parks Division employees and a Code Enforcement/Community Services officer. Mammoth Police Department Chief Al Davis assured the Council the focus would be on education first, followed by warnings before citing the worst of the offenders. “We need more coverage on weekends,” he said. With the current PD staffing, assigning an officer to Reds Meadow and the Lakes Basin would reduce coverage in the town.

To help mitigate cars parked on the roadways, Council intends to help Eastern Sierra Transit with funding for a bus concentrating on shuttling people between Reds and the Lakes Basin on weekends as well as additional staffing. However, it’s the additional staffing that may be the larger issue. ESTA’s staffing is down to 33-percent of pre-COVID levels.

The Mammoth Host Program has been a life-saver, but more Hosts are needed to work on the educate-the-tourist side of things. Council allocated $100,000 to help with the program. “They’re critical,” said Mayor Bill Sauser. “But they’ll be out grown the way things are going.”

With the tsunami of tourists northbound on U.S. Hwy. 395 still to crest, maybe spike strips may be the only alternative.

Hold the phone. Where is MMSA in all of this? These are their visitors, they should control them not the taxpayers.

A priority with the record influx of visitors should be lowering the speed limit on main street and in other areas. This is not a topic I see brought up often, but I constantly see visitors speeding across town without regard for pedestrians or potentially hazardous road conditions. Main street… Read more »

Great idea but really 400k to rent some porta potty and dispatch some MLPD officers Reds and the Basin? TOML leadership has to go from the mayor to Al Davis you know about Al right? These guys are really the problem. 400k really and a 14 million dollar ice rink… Read more »

No one owes you a affordable place to live. Perhaps you need to lower your standards and relocate to Palmdale

Just like no one owes you a store to shop at, or a restaurant to eat at, or a ski lift to ride on, etc. etc. Without employees to provide the services, ML would circle the drain. Employees need a place to live and Palmdale is 250 miles away.

Town that relies on tourism to survive angry at tourism.

Tinner
Reply to  Fixed the title

Fixed the title, ever heard of too much of a good thing?

Nobody is angry at tourism, it’s just the disrespectful entitled tourists that we’d prefer stay home.

“education first, followed by warnings before citing the worst of the offenders”
In other words nothing will be done.
We’ve already failed.
I’ve lost all hope in our town leadership, it’s as if they’ve already accepted defeat.

Frankly speaking—No, thank you. Promise, I’ll try hard not to grow up.
Deb

It will be heavier than normal because you’re only going to gain annual visitors out of the first timers that shot up last year, but it won’t be as bad as last year because local lock down measures in SoCal are not as strict in 2021. Either way, try writing… Read more »

Most of us locals enjoy Deb’s writing style and reporting just fine, thank you very much. She’s been covering the Eastern Sierra for decades, writing for both radio news and newspapers covering just about every topic imaginable from disasters to high school sports. She knows us…and we know her. One… Read more »

People will keep coming to the Eastside. They’re drawn here for many of the same reasons most residents live here. It’s time for a little less focus on marketing and a little more focus on management.