The US Environmental Protection Agency has officially designated the Town of Mammoth Lakes as an attainment area for the federal air quality standard for particulate matter. 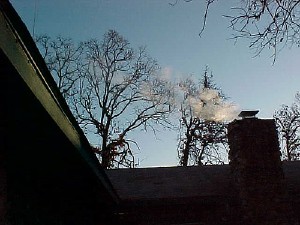 They also approved the Mammoth Lakes air quality maintenance plan, which demonstrates that compliance with air quality standards can be maintained through 2030.

Mammoth Lakes was designated non-attainment for PM10 in 1987 due to air pollution problems in the winter caused by wood smoke from residential wood burning and road dust from cinders used on roadways after snow storms.  Before air quality regulations were adopted, it is estimated that about 11 days each winter violated federal air standards.

In response to EPA’s action, Phill Kiddoo of the Great Basin Unified Air Pollution Control District said, “The re-designation of the Town of Mammoth Lakes to attainment is the result of tremendous cooperation between the Town and District staff and the public to help implement air pollution control measures.”

The effort to clean up the air started in 1989 with District and Town staff working with an ad hoc citizen’s group to draft air regulations for Mammoth Lakes.  The regulations later adopted in 1990 included requirements to change-out old-technology woodstoves and fireplaces with new cleaner burning appliances, no burn days, and vacuum street sweepers to remove the cinders after the roads dried.

According to the Town, almost 200 woodstoves have been replaced in Mammoth Lakes with cleaner burning systems with funding through the Air District since 2012.

Kiddoo explained, “At the time, the Town’s regulations were unique in California, but following Mammoth’s lead areas such as Los Angeles, San Francisco and Lake Tahoe adopted similar regulations and found the same success in cleaning up the air.

Residents and homeowners of Mammoth Lakes who replaced their old wood burning appliances and refrained from burning wood on no burn days can take pride in their contributions and the fact that they are now living in an area that has been officially designated as having clean air.”

With the return of cooler weather and the increased usage of woodstoves, the Town of Mammoth Lakes and the Great Basin Unified Air Pollution Control District want to remind everyone to follow these simple steps to keep the air as clean as possible:

The Town and the Air District continually monitor air quality, and will announce ‘No Wood Burning’ days when air quality is forecast to approach unhealthy levels. To sign up for automatic emails or texts when a ‘No Burn Day’ is announced, go to www.townofmammothlakes.ca.gov and click on ‘Notify Me’ on the left hand side and follow the directions on the webpage to sign up for the Air Quality/No Burn Announcements list.