Website comments have launched some ugly verbal attacks on members of the Mammoth Town Council, mostly for the $40 million debt from the lawsuit at Mammoth Airport. It’s a huge cloud over the Town’s future. Mayor Skip Harvey decided to respond to the public critics by opening the doors of his office to talk. 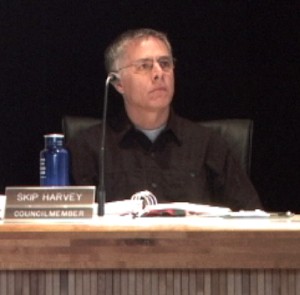 Harvey will extend open hours at his office at Base Camp Cafe this summer. The first time with the Mayor happened Tuesday evening, 4pm to 7pm. Harvey talked with four people, he said. Issues focused on the Town budget, which, even without payments on the big debt, stands with a shortfall of $2.6 million.

Those who work with special projects funded by the Town are worried. The areas discussed with Mayor Harvey include trails projects and transit services. Mayor Harvey said another citizen talked to him about traffic issues that don’t seem to get addressed in Sierra Valley Sites.

Mayor Harvey confirmed that Mammoth Lakes Land Acquisition to whom the $40 million is owed does want more consideration in the budget process. Initially MLLA was not mentioned at all. The current agenda bill mentions them more than once and the fact that whatever budget the Council adopts will be interim until a settlement is reached on the payback of the $40 million.