The Mono County Narcotics Enforcement Team (MONET), along with the assistance of Mono County Sheriff Deputies and the Mammoth Lakes Fire Department, concluded a warrant investigation in the Town of Mammoth Lakes. 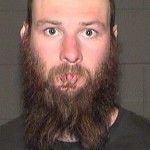 On the morning of Wednesday, July 10, 2013, Jacob Pellegrini, age 29, of Mammoth Lakes, CA, was arrested for sales and possession for sales, cultivation, and chemical production of concentrated cannabis.

Mr. Pellegrini is currently in custody with charges pending through the Mono County District Attorney’s Office.