The day after the Town of Mammoth Lakes held a wildfire workshop, fires in Ventura County and north of Sacramento were back in the news. The consensus: the state’s fire season runs from January 1 through December 31. 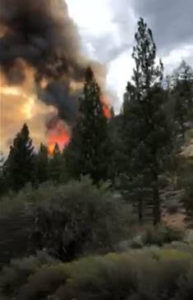 Representatives from Inyo National Forest and Mammoth Lakes Fire Department explained both their preventative measures and incident procedures to the Town Council, the first line of attack by residents concerned about smoke and fire danger near residential areas.

INF Supervisor Tammy Randall-Parker put it all in perspective toward the end of the two-hour session: “The safety of our fire fighters weighs heavily in our decisions,” she said, noting that up to 20 firefighters die in the line of duty each year.

Public Affairs Officer Debra Schweizer offered statistics defining the extent of the problem. Ten of the 20 worst wildland fires have occurred in the last 10 years; two of them just this year. The worst fires are human-caused and generally occurring near developed areas. These are always suppressed she said. Lightning-caused fires are smaller and less destructive.

The following is a rundown of information shared at the workshop:

The logical solution: a public outreach, education program to help the community understand how the fire agencies work and that “this is the world we live in now.”

A holiday tradition: Shop with a Cop in the Eastern Sierra
Celebration of Life for Augie Hess this Saturday