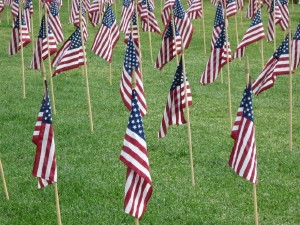 On the west lawn of the Mammoth Lakes Fire Station #1, 343 flags stood in memory of the firefighters lost.

Alt 92. 5 presents Fourth of July Fun in the Village at Mammoth! Celebrate our nation’s independence with an All-American Picnic, fireworks, free concerts, DJs, Ducky Races and the world-famous Chihuahua races.

On Monday July third it’s a full day of fun with roaming Stilt performers, Ducky Races in the pond and Chihuahua races in the plaza, all while DJ Zeus provides the beats

We’re capping the night off with a breathtaking firework display that will light up the Sierra sky.

On Tuesday, July 4th,  join Alt 92.5 in The Village at Mammoth for an All-American Picnic.

Starting after the Town’s Independence Day Parade, come to The Village for some tasty Barbeque and live music by Battlefield, Whole Milk and the Jaded Haters.

The festival follows the July 4th Mammoth Lakes Parade. Come join us from12:00 p.m. to 2:00 p.m. at the US Forest Service Fire Station, located on Main Street and Sawmill Cutoff Road (by Shady Rest Campground).

Interagency firefighters from BLM and US Forest Service will share how they suppress wildland fires. Fire prevention guest Smokey Bear will be making appearances throughout the day. Kids can learn about fire safety and earn a Smokey Bear prize. Everyone is welcome to join the fun!

As a reminder, fireworks are prohibited on National Forest and BLM lands. For more information, call Jeremy Decell at 760-924-5536.

Have a safe, enjoyable Fourth of July.

Celebrate Independence Day in Independence
Enjoy the 4th of July in Mammoth, but no personal fireworks