Mammoth Lakes, CA. – Mammoth Lakes Film Festival’s (MLFF) Festival Director Shira Dubrovner is excited to announce that MINDING THE GAP, the MLFF 2018 Bravery Award Winner, was just announced as one of the six nominees for Best Documentary at the 91st Academy Awards! 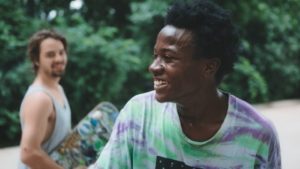 Minding the Gap/Pictures courtesy of MLFF

This nomination comes after months of award buzz and critical praise for MLFF Alumnus Bing Liu’s first film. Since it played at the 2018 Festival, it has been picked up by Hulu and has won awards and nominations from The National Board of Review, The New York Film Critics Circle, The Independent Spirit Awards, The International Documentary Association, L.A. Film Critics Association, and the Independent Film Project. It has also been featured in several Best of 2018 lists including Barack Obama’s Favorite Movies of 2018 and lists in major publications, including Time Magazine’s Best of Culture 2018 feature.

“We are very excited for Bing Liu and MINDING THE GAP,” stated Dubrovner. “For ON HER SHOULDERS and CRIME + PUNISHMENT to make it to the short list is a highly coveted achievement.” 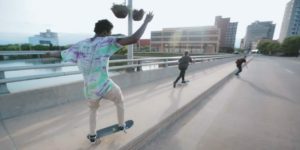 MINDING THE GAP tells the story of three young skateboarders coming of age in a small town as they deal with the consequences of domestic violence. In addition to its acknowledgement by TIME Magazine, The National Board of Review also recognized the film in its “Top 5 Documentaries” list.

The New York Film Critics Circle is an American film critic organization founded in 1935 with a membership that includes over 30 film critics from New York-based daily and weekly newspapers, magazines, online publications. This notable group awarded the film Best Documentary at their yearly awards event. Additionally, it was nominated for Best Documentary and the Truer than Fiction Award by the Independent Spirit Awards, a celebration of the spirited pioneers who bring a unique vision to filmmaking, and the premiere awards event for Independent Film.

In addition, MINDING THE GAP has been nominated for Best Feature and Best Editing by The International Documentary Association, a nonprofit organization dedicated to supporting documentary filmmaking, and Best Documentary at the 2018 Gotham Awards, an event hosted by the Independent Film Project, a non-profit created to help independent creators from around the world develop new projects, connect within the industry and champion collaborative and impactful storytelling at all stages.

ON HER SHOULDERS tells the powerful story of Nadia Murad, a survivor of ISIS attacks on the Yazidi people who escaped slavery to become an activist for her people. Earlier this year, she was awarded the Nobel Peace prize for her efforts, an award shared with Denis Mukwege of the Congo. The film was awarded the Freedom of Expression Award by the National Board of Review, the New York-based film-industry association with a small but influential membership of filmmakers, enthusiasts and scholars. Like MINDING THE GAP, the film was also nominated for Independent Spirit Awards in two categories—Best Documentary and Truer than Fiction.

The third film, CRIME + PUNISHMENT, that won the MLFF 2018 Audience Award for Best Documentary Feature, tells the story of 12 officers in the New York City Police Department who risked their careers to publicly testify against corrupt and discriminatory “quota” policies in the department. The film, along with MINDING THE GAP, was featured in the National Board of Review’s “Top 5 Documentaries” list. It was also nominated for Best Feature and Best Cinematography by the International Documentary Association.

The recognition of these films that were featured in the 2018 MLFF festival helps to attract other high-quality independent films and filmmakers to the Eastern Sierra. The festival has been consecutively selected by Movie Maker Magazine as one of the “Top 50 Film Festivals Worth the Entry Fee” since its first year, and has been covered by Variety, Associated Press, LA Magazine, The Wrap, Movie Maker Magazine, and The Huffington Post, among many others. Hundreds of talented filmmakers from around the world attend the festival every year.