By News Staff on May 1, 2019 in Entertainment/Local Events/Activities, General Misc. Stories, Public Event

Mammoth Lakes, California – The Mammoth Lakes Film Festival (MLFF) is pleased to announce their feature film line-up, as well as the Opening Night film, for the fifth iteration of the festival, taking place May 22 through 26 at venues across Mammoth Lakes. 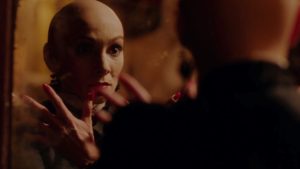 MLFF will open with In Fabric on Wednesday, May 22. In Fabric is a haunting ghost story set against the backdrop of a busy winter sales period in a department store and follows the life of a cursed dress as it passes from person to person, with devastating consequences. The film from A24 is directed and written by Peter Strickland and stars Gwendoline Christie (Game of Thrones) and Marianne Jean-Baptiste (Blindspot).

“We’re excited to bring such an amazing and eclectic lineup of films to this milestone year of our festival,” said Festival Director Shira Dubrovner. “We’re also thrilled to be hosting over 100 filmmakers this year, who will get to experience all the scenic wonder that the Eastern Sierras has to offer.”

“We received a wide range of films submissions this year that explored the lives of people living on the margins of an overheated world economy – either striving to push their way in, willingly living away from it all, or pushed to the margins,” said Director of Programming Paul Sbrizzi. “We’re looking forward to sharing these amazing and thought-provoking stories with all our festival-goers, in hopes that they spark some interesting conversations and debates on the human dimension of current global realities.”

The MLFF film line-up is as follows: