By News Staff on October 21, 2011 in Government Agencies/Utilities 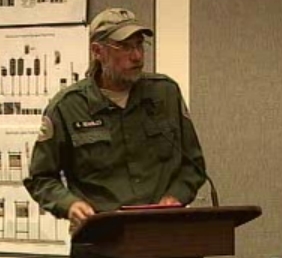 Locked up too soon?  That was the question raised before the Mammoth Town Council about Forest Service camping facilities in the Mammoth Lakes Basin.

Mammoth Wildlife Specialist Steve Searles stood up during public comment to speak as a private citizen.  He pointed out that he probably spends more time in the Lakes Basin than anyone else while he surveys bear activity there.  Searles told the Council that “All of the campgrounds are barricaded. Toilets are locked up and people are defecating around the buildings, and bear-proof dumpsters are bolted shut.”  Searles personally feels all of this happened too soon.

When asked about this issue, Marty Hornick of the USFS said, “We still have the Twin Lakes Campground open.  It has not filled up since the others closed.”  Hornick said the concessionaire went beyond his required open date before closure of the other camp facilities in early October when a storm hit.  “The concessionaire,” said Hornick, “did not have enough business to stay open.”  He added that the bathrooms have flush toilets, not compatible with freezing temperatures.  Hornick said pit toilets are available in many locations and some dumpsters remain open.

Searles said that visitors are driving around in the Lakes Basin in search of a place to camp but can’t find one.  “The Lakes Basin is under-marketed,” said Searles, “and under-used.”  He pointed to the Forest Service practice of giving campground host duties to the lowest bidder.  “The fewer people who come, the easier their jobs are,” said Searles.  “In these difficult financial times,” he said, “the Lakes Basin is an incredible attraction.”

Councilman John Eastman said that Mammoth Lakes is the economic engine for the county.  He questioned why campgrounds in the Lakes Basin are closed while campsites in June Lake and Convict Lake remain open.

When asked about that, Hornick of the USFS said that it’s primarily an elevation matter and temperatures when it comes to the toilets.  “This is not an uncommon thing,” he said, “and typical of our schedule.  Campground visitor numbers drop considerably after Labor Day.”

Other councilmembers agreed to speak with the Forest Service about this issue.

It’s time to cease posting “tea bag” comments. The posters either are ignorant that this is a gay slur, or have chosen to co-opt it for their own hateful purposes. The term has no place in civil discourse.

Well, from what I’ve seen in the news, most far-right, sanctimonious republicans who now prefer to be associated with the Tea Party, actually ARE tea baggers. Here’s a short list of the most infamous:

Funny how that works, isn’t it?

Gee, the following for-profit locations are CLOSED: Silver Lake Resort by June Lake; Parchers Resort in Bishop Creek closed Oct. 16; and Rock Creek is also closed, probably because, just like the FS said, after a certain date, there aren’t enough visitors to even break even. The FS is simply… Read more »

I would ask Mr. Searles to kindly remove his official uniform when he’s addressing the Council as a private citizen. That being said, I agree with his position on the basin.

Steve is working practically 24/7. I’ve seen him back in the woods behind my house at three in the morning. He was probably taking a break to talk to the CC.

I think your comment is off the mark with regard to Steve’s dedication and professionalism.

Up the Creek and Snow Show ought to go follow Sarah Palin’s bus around!

In the mantime…..they bleed the taxpayers Dry…Time to get back on the Bus Terribone “The total of U.S. state debt, including pension liabilities, could surpasses $4 trillion, with California owing the most and Vermont owing the least, according to an analysis released. The nonprofit State Budget Solutions combined states’ major… Read more »

That is why i hate that the USFS contracts out the running of campground services. The concessionaires ONLY want to run them while they’re profitable. Instead of looking at it as whole season and calculating their bids and the overall profitability of the season. The camping experience in usfs campgrounds… Read more »

Thank you for your post…I agree

Hey, upthe-teabagger, do you realize we’re talking about PRIVATE contractors here. The USFS is not running these campgrounds. Maybe if they were, the campgrounds would remain open, but then you’d complain about that, too. Instead of your constant, angry rants against government, perhaps once you could offer suggestions to actually… Read more »

You’ve illuminated the duplicity of the Tea Bags. They hate government for being too intrusive until they want the government to do something they think should be done. Then they rant that the government is not doing enough

ken- I am not a tea party person but I am quite sure they do not hate the government “for being too intrusive” – they just want “responsible” government and “smaller” government – not zero government. They point out that people should not always look for the government to “fix”… Read more »

Low bid and a focus on profit over service.
This is exactly what you get when you privatize public services.

Too bad you’re unable to see with your blinders on.

Figures…….Camping and fishing season still open for another 3 weeks or so….and what happens in Mammoth Lakes?……They shut down the ONE area up there where a family can go and have a nice,quiet time…..

The town can’t generate TOT when you stay at a forest service campground.