By News Staff on June 15, 2012 in Government Agencies/Utilities 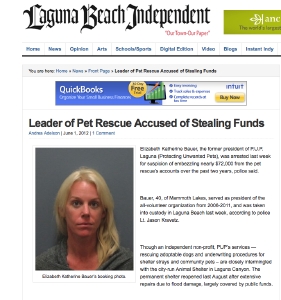 The Laguna Beach Independent reported on Bauer's arrest and allegations.

Listed as a practicing attorney with an office in Mammoth Lakes, Elizabeth Katherine Bauer was arrested recently on suspicion of embezzling nearly $72,000 from the accounts of a non-profit group called Protecting Unwanted Pets. Police allege she spent some of the money on her Mammoth Lakes property and on ski lift tickets.

According to the Laguna Bech Independent news, the 40-year-old Bauer served as president of the all-volunteer organization between 2006 and 2011.  The article in the Independent says that the pet rescue organization was “closely intermingled with the city-run animal shelter in Laguna Canyon.  City of Laguna workers were quoted as saying they had no knowledge of the pet rescue’s books.

The Independent says that after Bauer resigned in March, the new president of the pet rescue “noted several bank account irregularities and made repeated requests of Bauer for an explanation, but instead received excuses.”

A crime report was filed on May 22nd and when Bauer arrived at the animal shelter for a meeting, investigators met her.  The Independent article says that police allege that Bauer “used the money to pay rent on a Dana Point home, purchase ski lift tickets in Mammoth and to make repairs on her Mammoth Lakes property.”

Bauer is scheduled to appear in court for an arraignment on July 5th.

Oh what a surprise a lawyer from Orange County embezzling and from a bunch of dogs and cats. LOCK HER UP…in an animal shelter.

Oh hell no b$%&#h!! You don’t take money from animals for yourself! Throw the book at this scum. Dana point and Mammoth, living the freaking dream

I am shocked, shocked that a attorney could be accused of embezzling money from a non-profit organization.

Inspector…your comment had a ring of familiarity to it, and it didn’t register for a full day after driving me nuts… “Your winnings, sir”…

….What was that someone was saying about the (alleged) embezzlement cases going on in Bridgeport ?