The new Chief Financial Officer selected for Mammoth Hospital has backed out, according to Administrator Gary Boyd. David Rollins was scheduled to start work this week in Mammoth. Instead he took another job in Oregon. 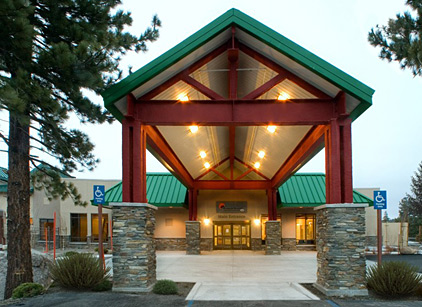 Administrator Boyd said that The Camden Group will continue to handle CFO services for Mammoth Hospital until another CFO is located. The job has been posted, and Boyd said he has received 10 or 12 inquiries. Phone interviews will be conducted next month.

Boyd said the hospital is, meanwhile, “going very well.” He said the bottom line for the end of the fiscal year on June 30th was in the black. The first month of the new fiscal year, he said, was also in the black.

Total accounts receivable to be collected – $16 million, which is down from more than $18 million a year ago, according to Boyd. The total budget sits at roughly $55 million.

We work to provide daily news to all of the Eastern Sierra, in the tradition of Eastern Sierra News Service and the Sierra Wave. We bring you daily happenings, local politics, crime, government dealings and fun stuff. Please contact us.
View all posts by News Staff →
Mammoth Charter School Dissolved to Make Way for New Plan
Bishop’s Grove St. Spiffed Up