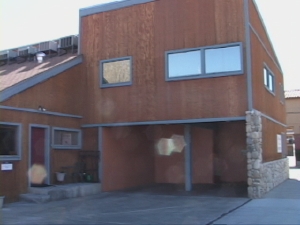 In recent weeks, Mammoth Hospital bought a 4,000 square foot building in Bishop at the corner of Home and Line Streets for around $530,000. Mammoth Hospital Chief Operating Officer Joe Bottom said the building will house orthopedic doctors and a physical therapy business. Some have viewed this move as a way to take patients from Northern Inyo Hospital to Mammoth.

At their last meeting, Mammoth Hospital Board members also approved the purchase of half of a lot behind the main building in Bishop to serve as a parking lot. Board member Helen Shepherd did tell Bottom that the Board does need a business plan for this project.

Northern Inyo Hospital Administrator John Halfen said there are no new restrictions. He said medical office building CC&R’s do require that practitioners be members of the hospital medical staff. Administrator Halfen also said that Dr. Perry, who signed the lease for Mammoth, wanted a month to month situation.

COO Bottom said of the Mammoth Hospital purchase in Bishop, “It’s a building. It’s not about relationships.” Bottom added that to get a good orthopedic group, “you need a good patient load.” Asked how he would respond to concerns that Mammoth is “stealing patients from Bishop”, Bottom said, “I don’t think that’s the case. They’re driving up here now.” Bottom said that some day the two hospitals “need to coordinate.” He said orthopedics are specialized and the two counties don’t have a big population. He said one group could serve both Mono and Inyo.