The Mammoth High School Husky Ski and Snowboard Team are the California/Nevada State Champions after a week-long of racing at Northstar, CA, March 6-10. Thirty-six schools and over 270 student/athletes competed in the event from all over California and Nevada. 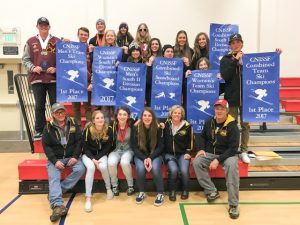 The competitions began with two days of snowboard Giant Slalom and Slalom racing in blizzard-like conditions with soft snow.

The MHS Snowboard men tied for first with the Shasta High School Ski Team in the GS/Slalom Combined Team results.

The MHS Women tied for 7th with Tahoe Truckee High School in the Combined GS/Slalom results. After the two days of racing, the MHS Snowboard Team walked away with the overall second place position, setting a strong foundation for their ski team to build a podium win upon. 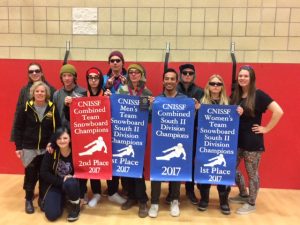 the slalom to finish 5th in the combined. Jacob Schroder placed 9th in slalom, and 17th in the GS to land him a combined 10th place. Andrew Gray placed 10th in the GS. Kris Martin, placed 7th in the SL and 23rd in the GS. Evan Hilliard finished in 19th in the GS and Team Captain, Carlos Morales finished strongly with a 37th in GS and 44th in slalom.

In the second two days of the race series, the ski team competed in overcast and sunny conditions with soft snow. Both the MHS Women and Men teams won the GS/Slalom Overall Team standings. 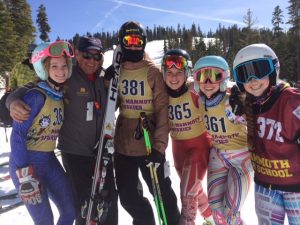 “We have won the title before in the past,” commented long-time MHS Ski Team Coach Jimmy Morning, “But never by such a huge margin. “There is no doubt in my mind that if we were able to progress on, our team would be one of the best high school teams in the nation.” 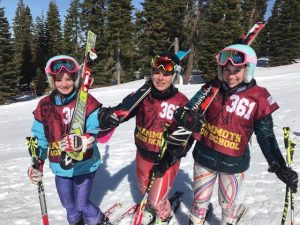 The “Cappuccino Girls” carrying their race skis to the start of the GS race.
(L to R): Melanie Moyer, Audrey Sandvigen and Mallory Podosin
Photo by Krissy Sandvigen

Leading off the women’s title was Team Captain, Mallory Podosin who placed 1st in the GS (she even beat all the guys her first run!), 2nd place in slalom for a combined tiebreaker for 1st place that took her to 2nd overall. Other MHS finishers included: 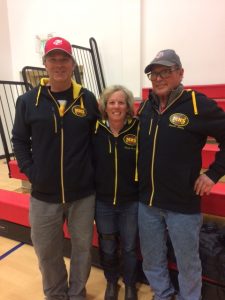 Team Captain Hayden Mannetter was the CNISSF Combined State Champion after placing third in both the GS and Slalom events.

“I am still pinching myself after this remarkable week with this amazing group of student athletes,” said MHS Ski and Snowboard Team Director, Connie Moyer. “Not only were they so fast, but they were such polite young adults the entire time we were there. 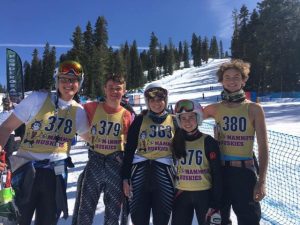 “We had so much fun together with lots of laughs. I am so proud of this team, they are legendary!

“Our team is funded almost 100% through fundraising and donations. A big huge thank you to Mammoth Mountain, Mammoth High School Boosters, Brent Allen of Allen’s Ironworks and Marc Wolter of Black Gold for all of your contributions.”

Congratulations to this Husky Team. Next year’s CNISSF Championships will be hosted by the Southern 2 Division at Mammoth Mountain, CA.

Congratulations to Mammoth High, its coaches, and student athletes!

Jimmy Morning is a living legend, a local hero, and an all-around good guy.

I know there are many skiers and ski racers who cherish him and his love of skiing.