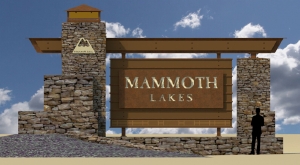 This is the view of the south departure sign as motorists drive into town.

The Mammoth citizens project to put up monument signs at the entrance to Town has moved ahead with just a bit of contention and a lot of support. 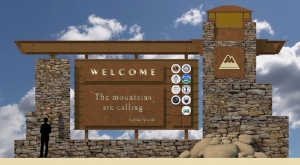 This is the view of the sign on arrival to Mammoth on the north side of 203.

Elizabeth Tenney has headed up the work to create two signs – one as visitors enter the community and one when they leave.  Tenney went to the Mammoth Town Council recently to get their blessing on the design and on two messages planned for the signs.  A vote online led to the winning quotes, both from John Muir.

The entry sign will say, “The mountains are calling…”.  The departure sign on the south of Highway 203 will say, “Going to the mountains is going home.”  See you again soon.  Tenney told the Council she is now at work raising money.  She said Mammoth Mountain would assist with sign placement and other work.

Joe Jaeger of the Mammoth Lakes Lions Club stood up at the meeting to say that the Lions, who traditionally owned and managed past entry signs since 1970, were “fairly adamant” that the sign should say Welcome to Mammoth Lakes.  The current plan would just say Welcome and also include logos of service groups and the John Muir quote.  Plus, the words Mammoth Lakes would be displayed on the back of the departure sign, making it visible on entry to the Town.  Tenney called the final design a “good compromise.” You can check out designs – www.mammothgateway.org.

Councilmen Skip Harvey and Rick Wood voiced support for the citizens committee design.  Wood said people who come to Mammoth know where they’re going.  They don’t need to see the name of the Town.  Harvey said he understood the Lions Club tradition but said with two signs, it makes a real statement for Mammoth.  The Council voted unanimously to approve the plan as presented.