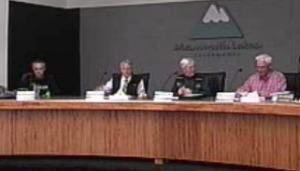 Martinez said the Council also talked a lot about organizing questions and answers on the MLLA situation for the public.  Martinez said this kind of information may go public as a posting on the Town website or at a public meeting of the Town Council where citizens could ask questions and get answers.  This may take place as a special meeting or as an agenda item at a regular meeting.  Nothing will happen until early January.

The situation now – Town officials will wait for a response from MLLA to the Town’s latest counter offer and discuss it at a December meeting. Officials have declined to reveal details of negotiations.  They point to a confidentiality agreement signed by both sides.

Asked about earlier reports that Mammoth Mountain CEO Rusty Gregory said he would be open to some kind of lift ticket surcharge to help the debt-strapped Town, Martinez said that this has not been pursued so far.  She said a surcharge would be a tax and have to go to a vote of the people.  The Town Council could place it on the ballot or an initiative could lead to a vote.

Martinez called this a timing issue.  A lift ticket surcharge measure would have to be finalized by early February to go on the next election ballot in June.  Martinez said she believes the mood of the public is for the Town to get its act together and explore options before taxing the people.  “We appreciate the willingness of Mammoth Mountain and others on this issue,” said Martinez, “but it is not the first thing we would consider.”

Personally speaking, there is limited, reasonably priced or free things for families to do in this town. Yes, you can ski and build snowmen and try to sled and of course hike and bike in the summer. But not a heck of a lot more….not a BIG experience here. The festivals are all alcohol-based with music that is way too loud…none are family focused. Other park and rec activities are for kids only… not family focused – there is a difference ya know.

Mammoth is an expensive and alcohol based, loud-music community once you leave the beauty of the backcountry wilderness. Something just feels “off” here when you try to include families into the resort mix….it just doesn’t work…Mammoth just doesn’t have that “it” factor for families….and frankly I don’t think the Mountain or town really cares to change that fact.

We are happy here in our own little circle of life, don’t get me wrong, but to draw tourist families here on a consistently large scale…the town doesn’t have enough of the “it” for them to bother.

I don’t generally comment on much when it comes to the Mammoth Ski Resort, although I often hear my sons comment on how expensive it is getting to come to Mammoth to snowboard. They only are able to do it through the season pass, which they feel is getting too expensive for the number of times they are actually able to use it.

This weekend I attended a wedding in Hemet when another wedding guest commented to me that he has skied all over the state, everywhere excepting Mammoth Mountain. His comment was that Tahoe for example, which he feels is a far better resort area, is not only less expensive but also has much more to do in the way of entertainment and family activities, so why should he bother? I could not help but think that if many others feel the same way,it could not possibly be a good thing for our area!

Another pass the hat strategy, attempting to penalize people who had absolutely nothing to do with the basis for this lawsuit. The thieves that prosper by under reporting sales and payroll taxes should be the ones financing this settlement if there is to be one.

The counter offer should have been the same as the original offer and that is bankruptcy. There is no other way that this process will be transparent and in our best interest.

All means of additional revenues needed for the settlement that will soon be shoved down our throats, should be placed directly on those that profit from the airports existence. These business interest that lobbied the politicians to take these actions, are the cause of the lawsuit in the first place.

I’d bet my bottom dollar that all solutions will burden the very people these politicians claim to represent. The reality is they have been bought and paid for by the towns business interest, the only thing they represent is the money maggots that have managed to destroy a fine community. The remaining carpet baggers will be fighting over the scraps when this is finally put to rest. We have been ripped off by these wolves in sheep’s clothing, it will continue because the politicians refuse to look in the mirror and address the root cause, GREED! Are we now suppose to believe that the very people who have caused the demise of this town will indirectly negotiate a settlement in our best interest?

I’m mad as hell and I’m not going to take it anymore should be the peoples position, instead of Marianna Marysheva-Martinez “Municipal bankruptcy: not a magic pill” propaganda she attempted to peddle before negotiations with MLLA began. It is time to send these parasites in leadership roles packing. They only have one goal in mind, filling their bank accounts with the peoples cash, not our well being after they’re long gone!

Mammoth is a nice mountain, but not that nice. Adding to the ticket price will make a lot of people quit going there, they will price themselves out of existence. I agree if Rusty wants to take a portion of the existing price and give it to the town.
A few years ago when the economy first tanked I rode a chair with a host who told me that even though there was a ton of snow (it was March) the mountain was considering closing because even though people were coming to ski, they weren’t spending enough on “extras”. My response was if they closed early when they still had a lot of snow, I would try to make them refund part of the price of my pass. We take our chances with weather conditions but if they close because of money someone else needs to take the place over.

Skier, excellent point, but you need to keep up with the times. Mammoth dinging out of town skiers to pay for its internal blunders is in keeping with the increasingly kleptocratic ethics of too many Americans, both in the 1%, to be sure, but also in the 99%. Measure S was just imposed on people who were not permitted to vote on the issue by other people most of whom do not have to pay the tax. Gets to be an insidiously pleasant habit, spending other people’s money, from small towns like Mammoth to big towns like Washington, D.C.

One thing to remember is that Mammoth Mountain’s real purpose is to attract buyers for MMSA’s holding companies condos and other properties and for it’s vacation packages. It’s what is called a loss leader where you advertise something at below market value so that the customers that come into your store will buy other stuff.

In our local economy, that other stuff is real estate and to a lesser degree vacation packages. Nobody outside of the executives at MMSA and it’s holding companies will ever see MMSA’s books but I’d wager that the mountain barely breaks even given the high cost of operations and the number of people buying day passes. They say they get about a million five hundred thousand skier days but many of those are pass holders who are not buying day passes. And many others get tickets with packages.

And the ultimate property is MMSA itself. Each time it is bought, it make money for the seller — or at least that’s the plan. It will be sold again to somebody who might even make it worse.

Even at $100 a day pass, I’d bet MMSA is not making a lot of money off ski operations alone. I’m quite likely wrong but that’s my story and I’m sticking to it….

Barely break even? I doubt it. The amount they charge for everything vs. the amount they pay the employees, I doubt it. $9 for a Coors tall can? $4 for a hotdog? $16 to ride the zip line in the summer? Look up lift prices at Heavenly or other high end ski areas and Mammoth IS ALWAYS MORE. Somebody is making bank. Plus, they barely employ anyone but illegals now.

“Martinez said she believes the mood of the public is for the Town to get its act together.”

And how much is she paid to come up with these brilliant conclusions?

MMM is paid $4000.00 A WEEK. Plus we pay for her transportation costs to and from her other residence, and I believe we supply her lodging and also cover expenses. I am assured that this is a very fair arrangement, that some negotiators in such situations get thousands more per month than MMM. But those other persons don’t work for Mammoth Lakes.

Sure more taxes for all of us who find it hard to pay our bills and buy food… smart move by our OVERPAID leaders.

Thanks for the debt load Rusty, I hope you are enjoying the good life while the rest of us suffer!

What is Rusty feeling guilty about something?.

That would make a lift ticket 200 dollars

Call is a TOT on a Lift ticket

OMG Our government has gone NUTS

“Martinez said she believes the mood of the public is for the Town to get its act together and explore options before taxing the people.”

Yeah, right… In other words, we’re going to get taxed AGAIN! Prop R. Measure U. And the soon to be Shmoo tax that you’ll have to pay for living within the town limits that will be another pot of money that attempts to pay for the incompetence of our town leadership.