The Mammoth Lakes Town Council approved a resolution authorizing the Mayor to enter into a long-term, exclusive refuse franchise agreement with Mammoth Disposal. Human Resources and Risk Management Director Michael Grossblatt had been negotiating the agreement for nearly three years. 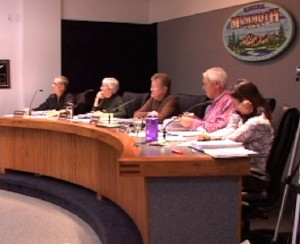 In other town business, the Mammoth Town Council approved funding recommendations from the Tourism and Recreation Commission. The first was for the 2009 Strategic Marketing Partnerships funding requests. The Commission had recommended awarding $47,000 to applicants and reserving the remaining $8,000 in that pot of money for future, last minute requests.

The second set of recommendations from the Commission that the Council approved on Dec. 16 were for the Measure R fall award cycle. A total of $631,775 in funds was awarded to different projects that support parks, trails and recreation in Mammoth Lakes.

We work to provide daily news to all of the Eastern Sierra, in the tradition of Eastern Sierra News Service and the Sierra Wave. We bring you daily happenings, local politics, crime, government dealings and fun stuff. Please contact us.
View all posts by News Staff →
Wish Trees Need More Donors
Minor Flooding at Mt. Whitney Fish Hatchery Leads to New Protocol