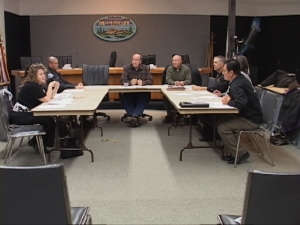 against Hispanic residents? Police Chief Dan Watson has gone to work to find the answer.

The committee met Tuesday with more on what in the previous meeting amounted to a long list of Hispanic complaints about what they perceived as harassment by police for no apparent reason. Committee member Luis Villaneuva, who is the Hospitality Manager at the Village, had interviewed a number of hotel workers in Mammoth. Chief Watson has said he wants to find out which cases are miscommunication or real problems.

After his own investigation into complaints, Chief Watson wrote a letter back to Villaneuva about an instance that was misinformation and not a problem with Mammoth Police. The Chief reviewed some 16 complaints and mostly found insufficient information and the need to meet with people involved in the complaints.

The Chief conducted his own snapshot survey of tickets written by his officers. He looked at the last ten tickets each of his officers had written to check the ethnicity of those ticketed. The Chief said that 71% were written to whites, 24% to Hispanics and 4% to others. “These statistics would not support that we are targeting Hispanics,” said Chief Watson.

Mr. Villaneuva still has concerns for the people he interviewed. The Chief admitted more communication is needed.

We work to provide daily news to all of the Eastern Sierra, in the tradition of Eastern Sierra News Service and the Sierra Wave. We bring you daily happenings, local politics, crime, government dealings and fun stuff. Please contact us.
View all posts by News Staff →
Attorney General will update medical marijuana guidelines
Chief promotes Sergeant John Mair to Lieutenant of Mammoth Police Department