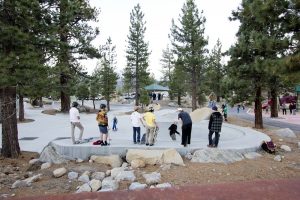 The park features the renowned Volcom Brothers and Little Brothers Skate Park and includes a complementary community park and playground. The project began in 2004 and was completed in October 2016 for a total cost of $2.34 Million dollars.

“The Town is extremely proud to deliver this park to the community of Mammoth Lakes as parks really do make life better,” stated Stuart Brown, Parks and Recreation Director. Trails End Park is connected to the Mammoth Lakes Trail System, encourages outdoor space for play and exercise, offers both self-directed and directed recreation, and enhances and promotes social equity.” 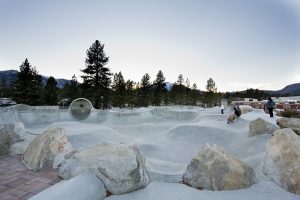 Mayor Richardson acknowledged the many non-profit organizations, corporations, outdoor industry (skate/snow) and retail representatives, donors, and volunteers that contributed to the completion of Trails End Park. After the obligatory group photos recognizing the many partners, Mayor Richardson personally praised Jane Baer and Billy Anderson from the JLA Project for their commitment to build a skate park for the youth of Mammoth Lakes worthy of Jeff’s passion for life [Jeff Anderson passed away in 2003]. 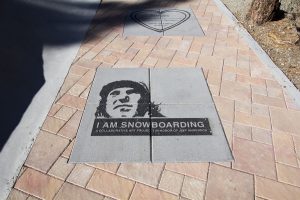 Richardson stated that Jane channeled an amazing amount of grief into positive energy. Jane responded, “I just wanted to build a place where kids can be kids.” Her philosophy was simple: “Success starts with an idea or dream and is built by determination and an unwillingness to give up.”

Betsy Truax, Chair of the Recreation Commission applauded public works for their efforts to complete the park and to Town Council and Mammoth Lakes Recreation for dedicating Measure R funds. “I particularly want to thank the JLA Project and Volcom for their continued support of this amazing park that every day, enriches and enhances the quality of life for the residents and visitors of Mammoth Lakes. It is truly inspiring.” 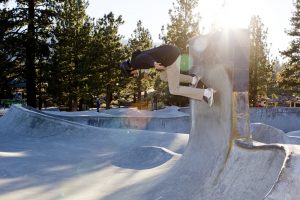 Remy Stratton, the SVP of Global Skate/Snow for Volcom complimented the Town on the completion of this Californian iconic skate park and for renewing the unique public-private partnership. To the surprise of many, the Volcom Brothers Skate Park is the only Volcom branded skate park in the world. Remy stated that, “It is truly a world-renowned skate park that receives significant media exposure and attention from the best skaters in the world and we are honored to have our name associated with the park.” 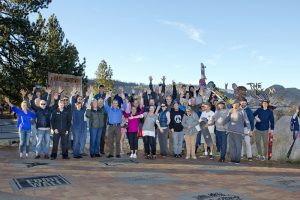 Finally, Steve Klassen, owner of Wave Rave who has been a skate park advocate since the ground breaking ceremony in 2004 personally thanked Jane for her unrelenting commitment to the youth of Mammoth Lakes. 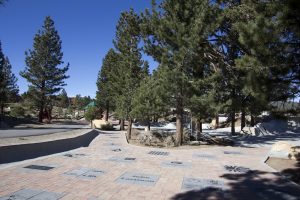