By News Staff on October 21, 2014 in Government Agencies/Utilities 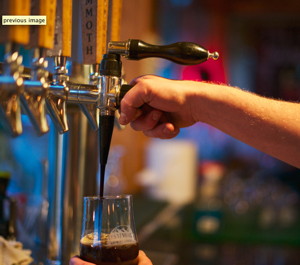 Mammoth Lakes, Calif. (October 21, 2014) — “A world-class beer that accurately exemplifies the specified style, displaying the proper balance of taste, aroma and appearance.” That’s the definition of a gold medal at the Great American Beer Festival (GABF), but to Mammoth Brewing Company (MBC) the recent gold medal win in the Brown Porter Category for its Double Nut Brown means so much more.

“It really puts us on the map like we never were before,” said MBC co-owner Sean Turner.

“While the GABF is America-only, it’s been around longer and is more prestigious,” Turner said. “So the gold at the GABF really solidifies our Double Nut Brown as the best brown porter in the world.”

The Professional Judge Panel awards gold, silver or bronze medals that are recognized around the world as symbols of brewing excellence, according to the site. These awards are among the most coveted in the industry and heralded by the winning brewers in their national advertising.

It’s been a big year for MBC. The Company moved to a larger, more prominent tasting room in Mammoth Lakes earlier this year and added a beer garden to the property this summer. The beer garden will remain open throughout the winter.

For more about MBC visit mammothbrewingco.com.

Congratulations to you and the other 286 medal winners!

When can I get it at Vons?

Can anyone tell me where the Double Nut Brown can be found on draft? Obviously at the brewery, but anywhere else on the Eastside?