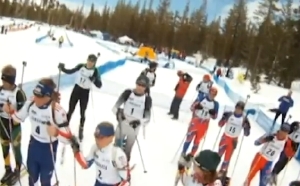 Weather is shaping up just dandy. Looks like a snow refresh Tuesday and Wednesday followed by bluebird skies Friday, Saturday, and Sunday. Temperatures in town this week have been mild, but snow on the Mountain is skiing great.

Proceeds from the Mammoth Winter Biathlon support our junior cross-country racers. They’re an enthusiastic bunch. They train hard, they have fun, and they get results. This year Amanda Kirkeby placed sixth out of fifty-six girls in the California/Nevada State Championships. Based on her season-long race results, Amanda was selected to compete at the 2013 Junior Nationals in Fairbanks, Alaska. In the seventy-six deep middle-school boys race, four Mammoth racers were in the top ten: Connor Kusumoto first, Trace Calvin fourth, Cameron Small fifth, and David Dalicandro ninth. All our other racers skied well, and we are proud of each and everyone of them. Well done all–you are why we have the Mammoth Biathlon.

Martina Navratilova: With motivation, you can be involved or committed. Just like with ham and eggs: The chicken was involved, but the pig was committed. You have to be like the pig.

Let’s be pigs everybody.