By News Staff on April 30, 2014 in Government Agencies/Utilities 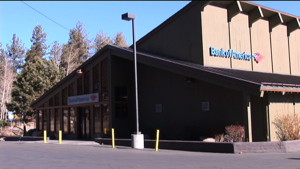 After many years of service to the Mammoth Lakes community, the Bank of America will shut its doors on Friday.

That announcement came out after the first of the year. Colleen Haggerty of Bank of America Media Relations had said that after careful consideration, bank officials decided to close the long-time branch. She said such decisions are “driven primarily by a decline in transactions as customers increasingly rely on other channels such as mobile and online banking.” The decision means a loss of local jobs and a loss of services.

Haggerty pointed to the use of technology and said that Bank of America customers everywhere are using their mobile phones to log into their accounts 120 million times per month. She said they deposit 100,000 checks via Mobile Check Deposit daily and transfer $2 billion per week. They pay bills through mobile phones, and B of A also has a mobile app frequently used. All of this means the brick and mortar bank has fewer customers.

Haggerty explained that the lease at the Mammoth Bank of America expires this month which offered a chance to “assess the longevity of the banking center and a timeline for closure.” Haggerty said Bank of America will remain an ATM in Mammoth. She said customers can still access all deposits and account services online, by mobile phone or at other banking center locations like Bishop. It was expected that customers would also seek out other banking institutions for local, walk-in service in Mammoth Lakes.

you gotta have a free cell phone to find out when your welfare check is going to arrive,and when the next shipment of govt. cheese is coming

It’s all part of the corporatocracy’s effort to get everybody online all the time so their location can be tracked and pointed ads can be delivered for businesses in the immediate area. The ideal American is a 24/7 consumer of goods and services. We’ve a long way to go but… Read more »

Ken, really! The Daily Kos as a source??? Same as Pravda

Really? You never saw a Tom Tomorrow cartoon before?

Talk about pearls before swine…

Back to the main subject, can’t B of A recognize it’s traditional customers who enjoy going to cash their paychecks in person on a Friday afternoon?? What if someone had a problem with their account that they could not handle over the automated phone system? This is one more stab… Read more »

Now you folks complain. I tried to gain support but nobody cared. The reason Bof A got away with this closing is that they really did not know who their depositors were. The was I see it and this was confirmed. Is that Most of the big depositors did not… Read more »

The people who don’t care are sitting in their comfortable corporate office. You can’t fight big money.

Wow, I got my first checking account there when I was just a puppy back in the late 80’s.
Holy cow, has it been that long?!!

It would of been nice if this article told us that B of A is still going to have atm’s and where they will be located. FYI. They have already installed atms at the Vons shopping center.

Come bank with me…. ally.com I have a great app for those who have smartphones and you can use any ATM anywhere you see one for Free…… I also do Direct Deposit and Check by phone deposits.

^ The two new B of A ATM ‘s are located in the Minaret Village Shopping Center (Vons) inside the old Heart in Hand location between The Booky Joint and Another T-Shirt Shop. Those will be the only B of A ATM’s in Mammoth Lakes now.

Awesome, now a new marijuana shop can go there 🙂

Thanks no excuse Ken… Obama give them out for free.

Dear Verizon: Can you provide details of how I can get one and how much a month I would have to pay to use my bank account?

Thank you. I didn’t know that program existed. But I don’t qualify. I’m not poor enough. But the 12 million who did get those cell phones are probably very grateful. “It began as a landline telephone program in rural areas – and a few years ago made it added cell… Read more »

Cell phones for the homeless. I guess they need a way to stay in touch. a few weeks ago I was in L.A. at a FWY Offramp. I saw a supposed homeless person chatting on her phone. She had several shopping carts and a sign asking for money. .

That’s no excuse Ken.. Obama gives them out for votes

Only in your dream world…

I DON’T HAVE A FRIGGIN MOBILE PHONE!

That reminds me of a story (probably apocryphal) about a guy in NYC who left a note on his car door: “I don’t have a radio”. The next day he dicovered the window broken and an addition to
his note: “so get one!”.

So in this case, who would be the thief eager to break my bank account?