By News Staff on January 30, 2013 in Government Agencies/Utilities 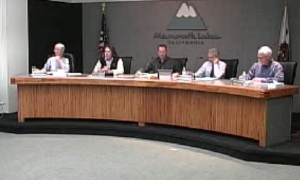 Tuesday, the Mammoth Town Council met in a special meeting closed session with Town Manager Dave Wilbrecht. The agenda says the session was to “consider evaluation of a public employee: Town Manager.” Council members have so far declined to comment. Another special meeting closed session with Wilbrecht is now scheduled for Thursday at 3pm. That agenda says the Council will consider appointment of a Town Manager. It also says the Council will consider “discipline/ dismissal/ release of a public employee.”

When asked about the closed session and the status of the Town Manager, Mayor Matthew Lehman said, “I can’t comment on anything right now.”

Mayor Pro Tem Rick Wood said there would be further review of the Town Manager on Thursday. Asked if Mr. Wilbrecht were leaving Town employ or changing his job in some way, Wood said, “I can’t confirm or deny that. It’s up to him.”

Wood said he knows there are a lot of rumors and speculation, but he said the Council is “evaluating the Town Manager as we normally do and should, particularly now with the events of the last year. We’re evaluating his performance,” said Wood.

We have placed calls to Town Manager Dave Wilbrecht, and at news time had not heard back.

Don’t hold back — tell us what you know…

Dave needs to go. We don’t need 2 managers, and from what I gather he’s always on vacation anyway.

PurplePeopleEater (love the name) he’s actually not because he’s on vacation all the time. Look at the town council meeting records. I also have friends who work for the town who say he’s never there. MMM, who doesn’t even live here, is present more than Dave is. Sorry, Dave is… Read more »

just puttin in the time until the big pay day..
pensions for everyone,,,

@ Ski John You’re wrong MMM is the one who is missing in action. She hasn’t been in Mammoth since Christmas time.The Town needs one manager and it isn’t MMM. She will be sucking this town dry with the salary they are going to pay her to be the interim… Read more »

Good points, Just Sayin. What should we do when that’s the going rate for a town manager’s salary? If it’s industry norm, no one will want the job if we don’t pay them what other cities pay. Have you read the Sheet this morning? Front page article on how many… Read more »

Saw this one comming
Reply to  SkiJohn

300k is not the going rate for a town this small!

Two very good employees have recently quit because things are so bad in the Town Office with MMM and Wilbrect. One was a senior planner and the other was the assistant to the Town Manager. They had good, well paying jobs and they could not take it any more. Perhaps… Read more »

The next CAO?
Reply to  Inside Job

It’s becoming more and more evident that based upon some inside talk, MMM is as ruthless and wiley as they come. And to top it off … doesn’t even live in Mammoth. Wouldn’t that be a hoot if our wonderful elected officials in their infinite wisdom, make her the next… Read more »

Inside Job
Reply to  Inside Job

Make that three good employees. Another one just left.

SkiJohn
Reply to  Inside Job

Don’t let the door hit them on the way out. There are plenty of qualified people who would love to live in Mammoth and get paid their salaries, even with the “stress” they have been under. No sympathy here. When someone makes $100k+ a year, they have changes and stress… Read more »

Word is, Eastman was the only one who supported dumping MMM. But Observer, I agree with the rest of your comments. The employees and the community will be the ones who suffer for the council’s arrogance.

In the corporate world, during bad times, hatchet-men are hired to “trim the fat” then they move on. In this case, where taxpayers’ money is involved, it seems inconceivable that no attempt has been made to lower the highest salaries (as a good faith example) of those in power, yet… Read more »

There is even more going on behind the scenes at all levels in the Town. In my opinion, everything can be traced back to the arrogance and culpability of Mr. Wood and Mr. Eastman. There is no place in our community for their on-going dishonesty and oversized egos. Don’t be… Read more »

Saw this one comming
Reply to  Observer

You are probably correct. What I really want to know is that if Wilbrect for the most part did what he was told to by his superiors (council) then I wonder what has been asked of him that he would not do? It is very clear from Wood’s comment to… Read more »

I would like more details on the mess you refer to.

Go to the source
Reply to  Observer

Why do people continue to vote for Wood and Eastman?

I guess I don’t have an exclusive claim on this handle, but I have used “Observer” on this website for the past year, and am not the author of the above post.
Thanks,
Observer

Saw this one comming

Who did not see this coming.
I hope we all get to hear the truth on this as I prefer not to speculate.
.

The Medium's the message
Reply to  Saw this one comming

What about the Mammoth Times’ “People of the Year” award?