On Thursday, February 18, 2016 there were two incidents of falling trees that damaged structures as a result of the strong winds that were associated with the storm that left in excess of a foot of snow in town. 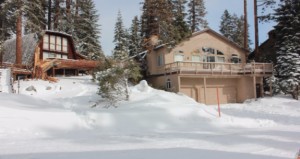 At 0856 a report came into the Mono County Sheriff’s Dispatch Office of a tree that struck a home on at 230 Hillside Drive. Upon arrival, responding units found an approximately five foot Jeffrey Pine had broken off very close to the ground and struck both a single family home and condominium building.

The tree significantly damaged the home and resulted sufficient damage to one condo unit such as to render it unoccupiable. There was also the smell of propane in the area of the damage and tanks serving both structures were turned off.

In both cases there were occupants in the affected structures and one adult received a minor cut to their nose and cheek which did not require medical treatment. The home and the unit were evaluated by Town of Mammoth Lakes Building Staff and determined that the residences could not be occupied. All of the affected occupants were able to find housing.

At 1126 Mammoth Lakes Fire/Police along with Mono County Paramedics responded to the report of a fallen tree at 248 Mammoth Slopes Drive. On arrival one tree, approximately 60’ tall was down on the roadway between buildings J and L; a second tree, approximately 120’ tall, was directly adjacent to the tree that had gone down, and was now leaning heavily toward building L. 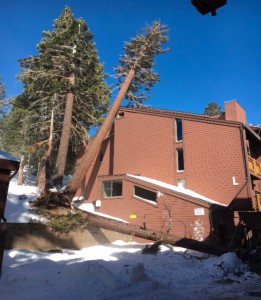 Responding crews immediately started evacuations of buildings L, K, and M, all of which were potentially in the fall path of the tree given the strong and erratic winds. Additionally, crews established an exclusion zone and shut off propane to the evacuated buildings.

The Incident Commander worked with the property manager to relocate occupants, and to have an assessment of the tree by tree service specialists. At approximately 1327 the tree fell into building L at low speed, coming to rest on the peak of the structure.

At the time of this release MLFPD had released the scene to property managers. There were no reported injuries. Two engines, two command vehicles, and one ambulance responded to the call with 13 personnel.

I always thought that those trees were un-fallable …? The one that was uprooted was probably just another victim of the drought. The one that snapped at the base …that must’ve been SOME windstorm. Just another reminder of the power of Mother Nature.