By News Staff on May 19, 2016 in Entertainment/Local Events/Activities, General Misc. Stories, Public Event

Mammoth Mountain’s Michelle Tomaier and Ben Wisner were both present in Park City, UT on May 14th, 2016 to accept awards from the US Ski and Snowboard Association. 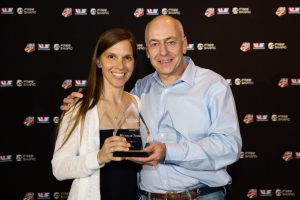 Michelle was given the Anna McIntyre Citation for her distinguished achievement in snowboarding administration and contribution to the advancement of the sport. The Snowboarding Sport Committee nominated Michelle saying “Michelle has been a consistent supporter of US Snowboarding and Freeskiing events for the last 15 years. As the Events, Athletics and Sponsorship Director at Mammoth Mountain, Michelle has been the behind Mammoth hosting the Revolution Tour and Grand Prix events. Michelle is also a huge supporter of youth development and provides the private training venue Project Gold Camps.” 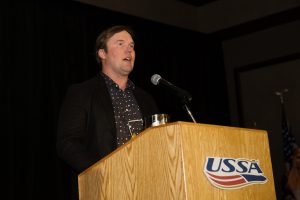 Ben was awarded both Development Coach of the Year and Snowboarding Domestic Coach of the Year; and accepted the award for Freeskiing Club of the Year. As program director of the Mammoth Freeski and Snowboard Team, Ben has helped put numerous riders on the US Snowboarding pro and rookie teams. He worked with Chloe Kim until she made the national team last year. Kim’s results have been stellar – in 2016 she won an X Games, US Open and Grand Prix title all at the age of 16. He has also worked with riders who’ve gone on to have great success on the Rev Tour. He is consistently feeding the pipeline with a great team of young athletes ready to jump to the next level.

Concert in the Rocks: Get ready to Rumble King
Mono Sheriff Braun offers Letter to Editor