The community of Rovana or Pine Creek has long served as one of the few affordable housing areas. Now, new owners have plans for new homes. 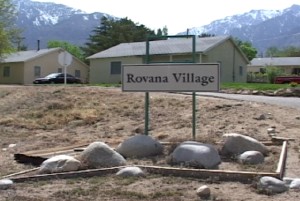 The Inyo Planning Department sent out information that an application has been received for development in and adjacent to the village of Rovana. Pacifica Development had purchased the area some 15 years ago and sold it to a new group, Pine Creek Village LP, headed by Mammoth builder, John Hooper.

The new project would build 198 residential units, including 109 new homes. These units would consist of 95 single-family homes, eight single-family homes on 10-acre lots, 51 modular homes, and 44 town patio homes consisting of 22 buildings which would accommodate two units each.

The proposal for Rovana also includes 89 single-family residences in the existing village and replacement of 47 mobile home units that were already removed.

Planners say the project also involves a land trade between the applicant and the BLM. About 12 acres which include the existing wastewater effluent disposal ponds will be acquired from BLM in exchange for riparian areas located north of Pine Creek Road.

In addition to usual permits, the project also includes creation of a Community Services District and Homeowners’ Associations. Inyo County issued a document asking for comments on the scope of the EIR. A public scoping meeting will take place Monday, March 29th at 6:30pm at Round Valley School.

We work to provide daily news to all of the Eastern Sierra, in the tradition of Eastern Sierra News Service and the Sierra Wave. We bring you daily happenings, local politics, crime, government dealings and fun stuff. Please contact us.
View all posts by News Staff →
Mammoth Dog Team Agreement Possible
“Extremely Silent Majority” Discusses the Future of Mammoth Lakes