By News Staff on August 2, 2011 in Government Agencies/Utilities 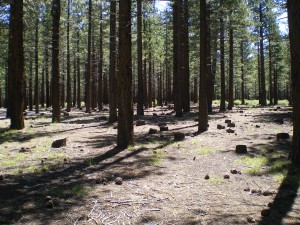 While the Inyo National Forest has faced mid-year budget cuts and loss of services, crews have continued with major fuels reduction projects to protect forest areas along Highway 395 between June Lake and Mammoth.

According to Dale Johnson, Interagency Vegetation Management specialist, the work underway south of Crestview Rest Area is part of a major fuels reduction plan signed off on by Jon Regelbrugge a few years ago. The work underway is similar to that accomplished in the Shady Rest area in the middle of Mammoth Lakes.

Johnson said forest health and fuels reduction “are almost inseparable in a stand like the one we’re working on.” Johnson said the forest there was extremely dense and very vulnerable to both wildfire and stress-induced bark beetle attacks.