By News Staff on April 5, 2012 in Government Agencies/Utilities 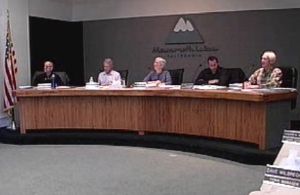 Mammoth Town Councilman Skip Harvey voiced what many see as a solitary view at Wednesday night’s Town Council meeting when he said the Town Council needs to take responsibility for the MLLA debt and for being far more open with the public about the strategies dealing with the debt and the possible impacts of bankruptcy.

The Town had signed a confidentiality agreement with Mammoth Lakes Land Acquisition to kept quiet about secret negotiations over the $42 million debt. Councilman Harvey said that since MLLA openly published a settlement offer in the media through Benett Kessler, why are the issues still in closed session?  He said Andy Geisel of The Sheet brought up the same issue at the last meeting.

Harvey said the Town Attorney explained there are active legal matters and strategies which remain legitimately confidential under the Brown Act.  Harvey said regardless of the Brown Act, people have a right to know.  He said the public can’t help the Town if they don’t know what’s going on.  Harvey said to the audience, “You need to know what bankruptcy means, what settlement means to our Town.

“This lawsuit,” said Harvey, “affects everybody in Town.  You have a right to hear from this Council what it means and not from a high priced attorney.  They may know the law,” he said, “but they do not necessarily know what’s best for the community.”

Councilman Harvey went on to say that it’s going to be tough.  “It’s a mess we’ve gotten ourselves into,” he’s said.  Harvey said it will take every single citizen and leader to help the Town.  “We need to get out of closed sessions,” he said.  “The people need to know.”

No other councilmember chimed in to support Harvey’s strong view.  Councilman Rick Wood did say that there are differing views on the Council.  He said each member takes the issue very seriously and don’t operate in a vacuum.  Wood pointed to the Frequently Asked Questions posted on the Town website as a source of information.  He also pointed to the structural deficit in Town Government with declining revenue.  Wood said, “We won’t take the bait and violate the confidentiality agreement.”

Thursday, the Town sent out a letter to the editor responding to MLLA’s March 23 letter sent to Sierra Wave to be published.  Check out the letter on our website, www.sierrawave.net.

The Town Council, the letter says, reported publicly and to MLLA that it is facing structural financial challenges above and beyond MLLA’s $42 million judgment.  The letter says the Town faces budget gaps this year and next that add up to $3.4 million.  Cuts and restructures lie ahed.  Next fiscal year the shortfall stands at 13% of the whole budget.  The Town says an across the board reduction would slash “employee compensation, cuts to marketing, housing and transit dollars, reductions in public safety and snow removal services, cuts to recreation programs, and so on. This is why a fundamental financial plan involving both cuts and debt restructuring is important,” the letter says.

The letter goes on to say that the Town’s restructuring plan, once finalized, will balance the “need to continue providing these services with the need to satisfy the MLLA judgment and other obligations of the Town.”  The restructuring apparently requires concessions in mediation, which MLLA has so far refused to enter.

The last line in the letter says, “As we continue to develop the Town’s restructuring plan and negotiate a fair and sustainable solution to the Town’s many financial challenges in  mediation, we will be able to make more detailed proposals in response to MLLA’s most recent demand.

So the letter really says nothing more than what the public already knew. Skip Harvey revealed that the MLLA issue did impact his decision not to run for Town Council. He said his decision had nothing to do with his health which is “improving every day.”  He said he wanted to take a breather to “see how the Town wants to do business.  “Are we the kind of Town that wants to play hard ball?  Or the kind of Town that takes responsibility for our actions?  I’m not quite sure,” he said.  “I want to take a break and see.”

Currently, the court order in favor of MLLA requires the Town to pay up the $42 million by the end of June.

Letter to editor: Town of Mammoth responds to MLLA letter
Stay close to emergencies with your own app
23 Comments
Newest
Oldest Most Voted
Inline Feedbacks
View all comments

It seems to me the question that should be asked is if there are those on the city council today who had one iota of input or involvement back when the whole mess started, why are these people still in the driver’s seat today?

A voter referendum would be appropriate here.

AMAZING!!! only 20 posts on an issue that affects so many lives….where so many were were willing to post on the condemndnation of a doctor that helped so many…or hurt so many,…depending on your side of personal experience. Yet, here there is indifference, on a matter that effects EVERYONE in… Read more »

Maybe the state of California could help solve their budgetary problems by selling the North County to Nevada.

Casinos in Bridgeport might be a boon for them.

People of Mammoth…wake up and speak!!! I know it might be embarrassing to get up and speak in a public forum, but your future and families futures are on the line here. For many, many years. Demand to know what scenarios A, B, and C are in this restructuring plan… Read more »

F.Y.I. You have a short memory. When Mono County ran Mammoth, they ripped off all the tax money from Mammoth and spent it in every other community in Mono County except Mammoth. Mammoth was a cash cow that the county milked dry and that is why the citizens of Mammoth… Read more »

Yeah I hear ya Ken

…and where do you think the money generated by Mammoth Lakes goes now? I’ll tell you where — it goes to Fortress Investment Group

It goes to Starwood Capital

When Mammoth Lakes was county, the money stayed in the county — now where does it go?

The only difference I can see, is who is doing the milking of this cash cow dry now? That is not my memory problem, it is your “reality” problem. The money is now being shipped out of county by the same citizens that allowed the corruption by the business interest… Read more »

Just a note that what Reality Bites says was stated at the time as a major reason to
incorporate Mammoth. BK

Dissolve the town government, returning to Mono county jurisdiction would save million$!

Give MLLA all the property they want. Then DWP can fight them in court. 🙂

“Single voice says open up the major debt dealings” Sadly, a mere single council voice, but one which speaks for thousands of Town residents, second home owners, employees, visitors and others. Thousands who have watched this travesty play out over far too long, much like a made-for-TV melodrama that should… Read more »

Give Ballas the airport, and let him subsisize his own development, sagebrush, and empty seats; don’t give him a dime. Sometimes courts make poor decisions and hang the wrong guy.
Go Mammoth!!!

Out of curiosity I listened to the webcast of last night’s meeting to verify for myself the accuracy of Bennet’s story line. It was accurate as can be and Skip Harvey is correct in my opinion. I also appreciate him not being a coward and hiding behind the “I inherited… Read more »

Please refrain from name-calling when there are those who are not around to defend themselves give their side of what you are calling cowardice.

Well said Skip! Town Council, let’s hear what is going on and what it means to those of us that live here….we are adults, we can take the truth….you just need to take responsibility and get on with dealing with reality!

The only bait being taken by Mr. Wood is the nonsense coming from his own mouth. We don’t need any more lawyers or lawyer speak running our Town. The letter from the Town earlier today and the frequently asked questions info sheet amounts to nothing more than a yawn. We… Read more »

Time to pack up and leave… why should my family suffer for people who profited and their self driven lame decisions. We where on Kathy’s side years ago. Told you so. … next up the spin from Rusty!

Hard to applaud a guy for coming out now and speaking his mind (though I agree with him) since he’s decided not to run again. Nothing to loose eh Skip? Why wasn’t you this forthright last year?! People not only need to know, but we can help. Council should open… Read more »

It makes sense the only one on Council that made any sense is now making sense.