Officials have talked about the project called Digital 395 for months. Now, the project stands close to happening, though, as Michael Ort, one of the proponents, said, “It’s not a done deal.” 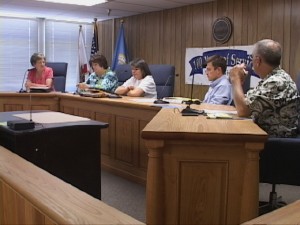 Digital 395 would lay a fiber optic line along Highway 395 from Boron in the south to Topaz in the north. The line would pass through all of our towns in Inyo-Mono and would provide high speed internet to residents, businesses, and government agencies. Local officials see this service as the missing link for economic development.

Ort spoke to the Eastern Sierra Council of Governments Friday. He told the Inyo-Mono officials that he and others involved in the project will go before the U.S. Department of Commerce officials soon to review their grant application. Ort said it’s not a done deal, but he hopes to have an announcement in July.

It’s kind of complicated, but Ort said he hopes AT&T and Verizon will get involved, apparently to subsidize part of the fiber. Ort said his company, Praxis, will build the line and has concerns about timing for permits and environmental review. Most of the fiber optic line would go in Caltrans rights of way. Ort said Caltrans told him their permits could take two years. That’s a problem for spending deadlines.

Ort explained that they’re just digging a trench, burying the line and covering it up. “We’re not building an 8-lane highway, a refinery or a stadium,” he said.

Supervisor Linda Arcularius said that if they are successful, the high speed internet service would attract technology and business with the least impact on the environment. Ort turned to Town Councilman Skip Harvey and said it would also be great if the Town would encourage developers to include fiber to their new units. More on this project in July.