Upper levels of the CHP continue to work on the investigation of the three car accident south of Bishop in August. Three 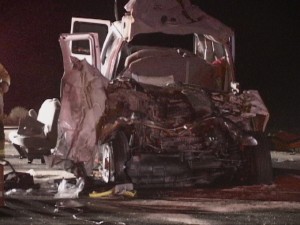 people died and 15 others were injured, some very seriously. It is those victims that the CHP had waited on to interview.

Early reports from witnesses on scene suggested that the person driving an SUV had veered over to the right and then jerked back over, rolling the vehicle numerous times into the northbound lane where it hit a van head on. The vehicles exploded in flames. A third vehicle crashed into the scene.

The CHP Major Accident Investigation Team, MAIT, took over the work to determine the exact cause of this accident. Part of the hang up remains access to some of the victims who have been undergoing surgeries or who could not speak to investigators.

One of the victims in the SUV, John Adams, is a good friend of Mammoth Recreation Director Stuart Brown. Brown said that the day his friend and students left Mammoth to return to southern California, they had left from his home. He said it has been a very difficult experience. Brown did say his friend, who was hospitalized in Reno, is improving.

We work to provide daily news to all of the Eastern Sierra, in the tradition of Eastern Sierra News Service and the Sierra Wave. We bring you daily happenings, local politics, crime, government dealings and fun stuff. Please contact us.
View all posts by News Staff →
“Change of Culture” in Town Government Leaves Several Jobless
Mammoth Geothermal Will Explore to Expand Megawatts