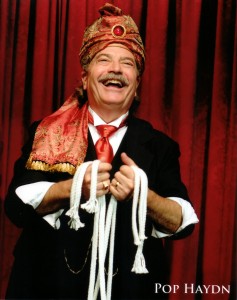 Pop Haydn has been named the Performer of the Year six times by world-famous Magic Castle in Hollywood and named him among the top five performers at the Magic Castle more than 30 times. Pop Haydn will perform at the Edison Theatre for three nights, March 11-13, at 7 pm on Friday and Saturday and at 4 pm on Sunday.

“We are very excited to have Pop Haydn perform this year,” said Mammoth Lakes Repertory Theatre’s Artistic Director Shira Dubrovner. “He has received terrific reviews and does wonderful close-up, stage and cabaret magic.”

Pop has performed all over the world in nightclubs, theaters, theme parks, cruise ships and television, and worked as a consultant for television and motion pictures. He has opened for Jerry Seinfeld, the Smothers Brothers, Loretta Lynn and others, and performed on cruise ships of many different lines, including Cunard Line’s Queen Elizabeth 2, and the Diamond Princess. Haydn has worked hotels and casinos including Caesars Tahoe, and was one of the first acts chosen in 1996 to open Caesar’s Magical Empire in Las Vegas.

What: March Magic with Pop Haydn

Where: Edison Theatre, 100 College Parkway across from Cerro Coso College