Mammoth Lakes, Calif. – Mammoth Lakes Repertory Theatre’s annual, family-friendly and outrageously fun March Magic! returns to the Edison stage this year featuring the talented comedian and magician Dana Daniels along with his psychic parrot, Luigi (yes, a Psychic Parrot!). Dana Daniels has been named the Comedy Magician of the Year and two-time Stage Magician of the Year, both from the Academy of Magical Arts. DanaDaniels and Luigi will perform at the Edison Theatre on Friday, March 17, at7 p.m.; and two shows on Saturday, March 18, 4 p.m. and 7 p.m. 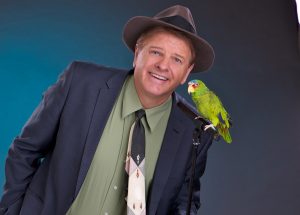 “Dana has been recognized by his peers as one of the best comedian magicians working today,” said Mammoth Lakes Repertory Theatre’s Artistic Director Shira Dubrovner. “We are thrilled to have him perform in Mammoth.”

With Daniels as the comedian and Luigi as the straight bird, the duo never fails to fracture an audience with laughter. Daniels sets out to prove his little green friend is truly clairvoyant by performing incredible magic blended with rapid-fire clean comedy and audience participation.

It’s Dana Daniels’ unique twist on magic that separates him from other magicians, and separates Luigi from other poultry.

What:   March Magic with Dana Daniels

Where: Edison Theatre, 100 College Parkway across from Cerro Coso College