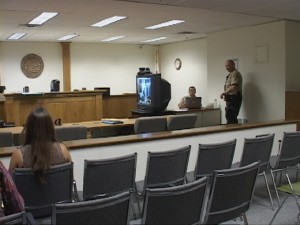 Lupe Almaguer had appeared in Mammoth court via teleconferencing in earlier months.

child molestation. Almaguer’s attorney, public defender Dave Hammon confirmed that he will ask for another continuance.

Mr. Hammon said he needs more time to prepare for the sentencing of his client. Deputy District Attorney Todd Graham said that on Tuesday he will announce that the People are already to proceed forward on sentencing the defendant.

Mammoth Police arrested Almaguer last October when they said he had committed crimes of sexual abuse on two children in his care who are now adults. About three months later, Almaguer pled guilty to four felony counts of child molestation of four victims while each victim was under the age of 14. Mr. Graham had stated then that the defendant was subject to a possible prison term of 15 years to life for each count. Graham had added that Almaguer is not eligible for probation.

Almaguer was originally set for sentencing in February. The sentencing is still set for tomorrow with the issue of another continuance before the court.

We work to provide daily news to all of the Eastern Sierra, in the tradition of Eastern Sierra News Service and the Sierra Wave. We bring you daily happenings, local politics, crime, government dealings and fun stuff. Please contact us.
View all posts by News Staff →
News Briefs: severe trimming, pumps running and ski helmets
Dog fans – must have quilt in ICARE raffle