In a highly emotional atmosphere, lawyers argued their cases, victims and their families barely restrained their feelings and 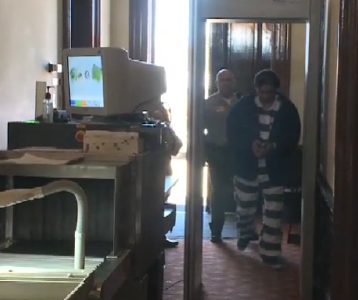 Lupe Almaguer makes his way to the courtroom for sentencing.

Jonah Matthewson was in the courtroom in Bridgeport, reporting for Sierra Wave. Almaguer had earlier pled guilty to four counts of child molestation. His victims were adults who, as children, had attended his day care center. The District Attorney’s Office said the victims were five girls, entrusted to care at Almaguer’s day care facility.

Each count carried a possible sentence of 15 years to life. Judge Magit said that the court would assess whether Almaguer would serve each sentence concurrently, together, or consecutively, one after the other. If concurrently, he would be eligible for parole in 15 years when he is 72.

Defense attorney Dave Hammon argued for the shorter term, and Deputy District Attorney Todd Graham, for the longer term. Judge Magit explained the guidelines for his decision. He named some considerations – that the crimes were violent and victims suffered physical and psychological harm, that Almaguer took advantage of a position of trust, that the crime involved planning and sophistication, and that there were multiple victims and offenses over a long period of time from the 1990s until 2010.

The fact that Almaguer had admitted and was diagnosed as a pedophile came up as a factor. When it was brought up that Almaguer’s emotion toward his victims was, as he said, “love”, victims’ families could not conceal their anger. There were also stifled outbursts when Judge Magit said that Almaguer’s remorse would be considered during sentencing. At one point, Deputy DA Graham turned to the audience and asked them to quiet down. More than a dozen people, both victims and their families, filled the audience. There were tears and audible expressions of outrage.

Almaguer himself apologized in open court to his victims and their families. He said, “I hope the kids follow their dreams. Again, I am sorry.” At one point, family members of victims made statements to the court – expressions of anger and frustration. They described Almaguer as “an evil human being.”

Judge Magit sentenced Almaguer to 15 years to life for four counts of child molestation to be served consecutively which amounted to 60 years to life. The Judge ordered Almaguer to pay some amounts of restitution from prison earnings and to undergo AIDS testing. He was remanded to the Mono County Sheriff’s Department and will be transferred to a correction facility in Tracy, CA.

We work to provide daily news to all of the Eastern Sierra, in the tradition of Eastern Sierra News Service and the Sierra Wave. We bring you daily happenings, local politics, crime, government dealings and fun stuff. Please contact us.
View all posts by News Staff →
Inyo’s water debt to Los Angeles?
Deputies arrest June Lake man on marijuana cultivation