Thought you saw Luke Perry over the holiday? You might’ve. The one-time 90210 star along with other actors went through the paces on Inyo County locations for a test shoot that could turn into a feature length Western. 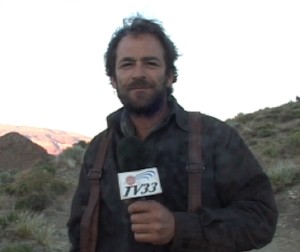 The project was directed by James Franco, who played Spiderman’s best friend in that film. Actors Scott Glenn and Mark Pelligrino joined Luke Perry as cowboys. A small group of locals from Mammoth, Bishop and Big Pine worked as extras. The three-day shoot filmed in locations near Big Pine and also in the Tungsten Hills area.

Cleland Hoff of FilmMammoth provided location and production assistance. She said the Production Company seemed thrilled with their footage. Hoff said, “I’m looking forward to the possibility of having this film shot in the Eastern Sierra.”

We are, too, because Luke Perry says he watches TV33. Thanks, Luke. We watch you, too.

We work to provide daily news to all of the Eastern Sierra, in the tradition of Eastern Sierra News Service and the Sierra Wave. We bring you daily happenings, local politics, crime, government dealings and fun stuff. Please contact us.
View all posts by News Staff →
Las Vegas Flight Rumors Set Straight
Bridgeport Man Sees Mismanagement in MCSO