By News Staff on January 8, 2018 in General Misc. Stories

Eleven years ago, then Los Angeles Mayor Antonio Villaraigosa turned the knob at a diversion dam below Lake Tinnemaha sending water down the 62-mile stretch of the Owens River to the dry lake. 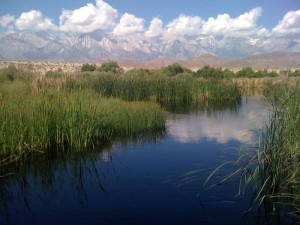 In an interview with the LA Times Louis Sahagun, Villaraigosa said “This is a new chapter in our relationship with the Owens Valley. We can’t take back what happened here 90 years ago, but we can make it better.”

The Lower Owens River Project was the largest river restoration ever undertaken. It was supposed to be a rebirth of both the river and the valley. In an interview roughly nine years ago, Los Angeles Department of Water and Power’s Water Resource Manager Brian Tillemans, now retired, described the possibilities of the project with cautious optimism.

Fast forward to December 21, 2017 and the annual report on the LORP. Previous annual reports had standing room only crowds, lively discussion and a sense there were solutions. This year there was little optimism, less enthusiasm and while there has been some habitat improvement, there are more tules, fish kills and problems.

This past year was obviously different—LADWP had to figure out how to move as much water as quickly as possible out of the valley and off the Owens Lake to protect the dust control infrastructure. There was some speculation the high flows would scour the river, wipe out the tules, move the muck and improve water quality.

The cold early spring flows did some of that, but subsequent flows during the summer’s peak run-off seems to have made a bad situation even worse as warm water stirred up the biomass from dead tules and reduced oxygen levels below the needs of the fishery. According to LADWP’s Lori Dermody, the tule to open water ratio was 4-1 (in favor of the tules) in 2010 and probably worse now.

LADWP requires a water neutral position on the river and points to the Owens Valley Committee’s refusal to allow for a higher capacity at the pump back station that takes water from the river and sends it back to the aqueduct. The OVC simply doesn’t trust the department fearing the LORP will just be a conveyance to send water to Los Angeles. The county Water Department doesn’t have the staffing to fulfil all the reports, drafts, studies and monitoring recommended by the consultants. In this war over water, the tules are winning.

It wasn’t all bad. Inyo’s Mitigation Manager Larry Freilich outlined some of the plusses and lessons learned from the exceptional run-off. There was a 435-percent increase in fall waterfowl in the Thibaut ponds; the shrub cover was reduced in the floodplains, the early spring flows proved beneficial and there was an increase in woody recruitment.

In an effort to regain some optimism for the rebirth of the Owens River, we went to Mike Prather who’s been involved in the LORP and habitat development on the Owens Lake.

“You have to take the long view,” he said. The Islands, an area just east of the Alabama Gates, north of Lone Pine, is the worst case scenario with tules and marsh lands invading what was once meadows and willows. “We have to find a solution for the Islands,” Prather said.

Prather looks to the County’s Water Trail project as an example of adaptive management that could work. The project would open up a six-mile stretch of river from the Narrow Gauge Road south to the outtake, turning a tule-choked section into a navigable river, improving both flow and water quality. “That’s one-tenth of the LORP,” Prather pointed out.

Prather’s not averse to increasing the pumpback capacity from the current, mandated 50 cfs to give DWP its water neutrality and allow for higher seasonal flows on the river. “The language can be drafted to give us the protection we need,” he said.

Bottom line: if the Lower Owens is ever going to fulfil its promise, all the entities involved have to have the will to get it done.