By News Staff on March 30, 2013 in Government Agencies/Utilities 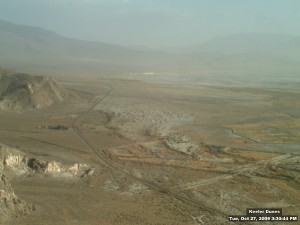 Los Angeles’ conquest of Owens Valley was famously compared to rape by Morrow Mayo in 1932. In 2006, LA Water and Power Commissioner Mary Nichols compared the Owens Valley-LA relationship to a troubled marriage. I suggest “seduction” is the best way to understand Owens Lake Master Plan negotiations. In 2010, DWP made a proposition to just about every environmental group, and county, state, federal, and tribal agency in the valley. Almost all yielded to DWP’s advances, enamored of “being at the table” and the MOU DWP promised to negotiate.

The first years were sheer bliss. Frequent meetings were held. Subcommittees were formed and working groups established! Meanwhile, DWP exploited the relationship shamelessly. It used the negotiations as a vehicle for diverting attention from its excessive groundwater pumping, short- changing ranchers their irrigation water, and other abuses of the Inyo-LA Long Term Water Agreement. Last fall DWP even used negotiations in its outrageous media attacks on Ted Schade and Great Basin Unified Air Pollution Control District.

Then, DWP’s ardor cooled. For an entire year, no Planning Committee meetings were held and DWP sued some of its negotiating partners. Now, it’s official — DWP has jilted them all. In a March 26, 2013 “Dear John” letter, DWP’s Marty Adams wrote that DWP intended to develop a management plan unilaterally. DWP needs some space; trying to please all those negotiating partners took too much out of it!

To soften the blow, Adams assured jilted negotiating parties that DWP still wanted to be friends, and would continue to support the negotiations’ questionable offspring, the “Habitat subcommittee.” This is because DWP is establishing a new wellfield near Owens Lake and wants the subcommittee to decide how much damage DWP can do and still call its pumping “sustainable.” Ignored by all parties is the fact that the Inyo County public, at DWP’s request, addressed this question of acceptable impacts back in 1999 and said, in effect, “no level of damage is acceptable.”

How will this soap opera end? Will habitat subcommittee members meet with DWP, thereby allowing DWP to greenwash its new pumping? Will jilted negotiating partners ever realize DWP’s interests are antithetical to their own and they have been used? Time will tell!

-We need anchor threads on a popular blog where we can post the data and science, solicit creative solutions from educated and creative 395 travelers, and educate the public on the facts of the situation. Environmentalism, conservation, and sustainability are all very popular topics. The 17,000 people of the Owens… Read more »

Don’t give up. I think education is the answer. Two and a half million people travel 395 annually to visit Yosemite, Whitney, Bishop, Mammoth, and other valley attractions. Why isn’t there an educational website advertised through radio and billboards to capture their attention. Many of those LADWP customers who travel… Read more »

Nice Job Tim! Good delivery, for me it’s hard not to assume people as arrogant or ignorant to not see the urgency in understanding what we are doing to our MotherEarth!
Your right, education outreach is a answer, But how do you get past the fundamentalists fear of social change?

More negative effects of over-pumping. http://ga.water.usgs.gov/edu/sinkholes.html The overburden sediments that cover buried cavities in the aquifer systems are delicately balanced by ground-water fluid pressure. The water below ground is actually helping to keep the surface soil in place. Groundwater pumping for urban water supply and for irrigation can produce new… Read more »

I have the “Thee Stages of Truth” on my wall at all times. A worthy bit of philosophy. RE: Rapid Global Climate Change and water. The debate is over. RGCC is real and it’s expanding the Southwestern desert Northward. The drought in the West is expanding and there’s just too… Read more »

Examples of Innovative Approaches that Contribute to Ground-Water Sustainability. This is a very interesting article from USGS featuring municipalities that have recharged their groundwater, some as early as the 1930’s! Many of these areas rely solely on ground water so sustainability is very important to them. http://pubs.usgs.gov/circ/circ1186/html/boxg.html Many of them… Read more »

Shenanigans. The Irish etymology of the word is Sionnachuighim meaning “I play the fox.” The obvious admitted truth of the DWP playing shell game shenanigans in it’s dealings with the stake holders of the Owens Lake Master Plan ,trying to buy off and work one group against the other cannot… Read more »

The results of over pumping are disastrous, look at this USGS link about land subsidence. It is truly amazing. http://ga.water.usgs.gov/edu/earthgwlandsubside.html From the USGS Groundwater site. http://ga.water.usgs.gov/edu/gwdepletion.html Excessive pumping can overdraw the groundwater “bank account” The water stored in the ground can be compared to money kept in a bank account.… Read more »

If you change the word “water” in your piece into “drugs” or “alcohol” it rings of a typical addict or alcoholic story. It looks to me like LA’s water problem is already unsustainable and they are acting like drug addicted people who just can’t slow their consumption. I really feel… Read more »

Good points Tim. Tim isn’t so that in order to attract water, you have to have water on the ground, as in bodies of water. Case in point, Mono county, has a much higher rate of precipitation than Inyo county, pretty much being the county line as a dividing point… Read more »

Big Al, I have a busy day and will address this later with links and citations.

Big Al, To answer this question we would need to look at year over year rain and snow tables for Mono staring in 1913 and compare them to Inyo. It is a big job, does someone out there have time to do it?

LADWP is simply a might makes right, on going criminal enterprise, and seems to me qualifies for the Rico Act.