From mid-June to July 10, a procession of telescopes and their California Highway Patrol escorts will crawl down State Route 168 from Cedar Flat to the Owens Valley Radio Observatory, Big Ears, on the valley floor just north of Big Pine, stopping traffic for up to two hours initially, but now CalTrans reports 20-minute delays. 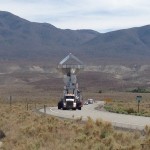 The 23 dishes at the White Mountain’s Combined Array for Research in Millimeter-wave Astronomy, CARMA, have been watching the skies for 11 years, until funding was cut by the National Science Foundation. The site, leased from the Inyo National Forest, will have to be returned to its natural state. The presence of the facility will be erased.

For anyone who has ever attended the annual CARMA open house and listened to descriptions of projects and research at the facility, the month-long relocation is a funeral procession. Eighteen scientists and technicians are gone, leaving a staff of seven at the Big Pine site.

According to one of the remaining scientists Mark Hodges, the eight 12-foot University of Chicago and nine 20-foot UC Berkeley dishes will be stored at OVRO for two years, then possibly destroyed. The remaining six 34-foot dishes, owned by Cal Tech will be incorporated into research projects at Big Pine.

The smaller dishes head down SR 168 two at a time in the mornings and again in the evening. The larger dishes have to be taken off their bases to be relocated, taking a whole day to transport just one.

“When we found out about losing (CARMA) funding,” Hodges said, “it was a sick feeling. We knew we’d lose people who all loved living in the Owens Valley. It was a very special group; they could do anything they were asked to do.” In addition to staff, CARMA hosted “summer schools” for graduate students. “We had three times as many hours requested in student proposals then were available in a day,” he said.

The scientists, in a grossly overly-simplified description, looked at radio wavelengths to determine the composition and origins of the universe. Work will continue in the valley, looking at either stability or significant changes in the sky with an array of 300 antennas that can correlate images of the sky once each second, correlating long wavelengths with gamma ray satellite observations to see if the source is the same and looking at carbon monoxide in the early universe.

The funding issue, ironically, started with the collapse of a 300-foot dish at a radio wave observatory in Green Bank, West Virginia in 1988. The late Sen. Robert Byrd, legendary for his ability to funnel federal dollars to his home state, passed legislation that funded the $75 million replacement.

According to Hodges, the wording in the legislation compelled the NSF to support large, new radio astronomy facilities. The Atacama Large Millimeter/submillimeter Array, a consortium of scientists from Europe, America, Canada and Asia, broke ground on the Chajnantor plateau in Northern Chile at an altitude of 16,404 feet. “The foundation didn’t have enough money for this three-year period to fund any other projects,” said Hodges. “We’d hoped CARMA would complement ALMA.”

Myself & a few friends have made a hang gliding trip to the Owens Valley every summer for 30 years. We go exploring on non flying days. In 2014 we happened upon the Carma site & went in to investigate. It was really cool walking around among all the dishes,… Read more »

I’m sorry to see this research site get removed after all the work done to get it into place. The environmental impact study prepared by the Forest Service in response to the request to locate it much further south in the Inyo Mountains concluded that the proponent’s preferred location would… Read more »

Very sad to lose such a center for astro research here. Ironic too in that Owens Valley welcomes these scientists and techs yet the Chilean locals at the ALMA site have gone on strike and the Hawaiian locals at the Thirty Meter Telescope site continued protests have caused work to… Read more »

Are we now going to have a “dish graveyard” or storage area near Big Pine? How long will the equipment be mothballed? If so, this will certainly change the views when traveling along 395. Hope I’m wrong about this. It seems as if they performed an awful lot of work… Read more »