The man who still captures headlines in major media. Dave McCoy stands out in Tuesday’s Los Angeles Times, featured in the main section. 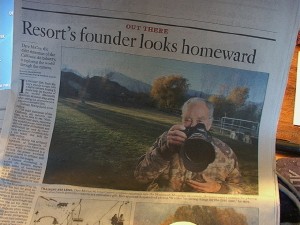 The sub-head to the story by reporter Louis Sahagun says, “Dave McCoy, the elder statesman of the California ski industry, is exploring the world through the camera.”

Sahagun writes that four years ago, Dave McCoy’s friends bought him a digital camera to help him stay active after the sale of Mammoth Mountain. McCoy is not a man who just “fills his time.” The story says McCoy found a new calling.

The story says that at 94, McCoy has archived literally hundreds of thousands of photographs in his home computer. If you’ve wondered what McCoy does these days, the Times story says he prowls the 5,000 miles of backcountry roads several days each week on his ATV and his cameras that he calls “his six-shooters.”

(Check out the story at www.latimes.com)

We work to provide daily news to all of the Eastern Sierra, in the tradition of Eastern Sierra News Service and the Sierra Wave. We bring you daily happenings, local politics, crime, government dealings and fun stuff. Please contact us.
View all posts by News Staff →
Bureaucrat Beat: Club Evil, LA, You Owe Us, and Lonely Rats
Two New Businesses Seek Bishop City Council Approval