By News Staff on July 11, 2018 in General Misc. Stories, Obituaries

Wife, mother, grandmother and great-grandmother. Lorrel Marian Elder was born in Susanville, CA and was raised in a small valley just above Double Check, Nevada which was a railroad spur where box cars were left for her father to fill with gunnysacks full of diatomaceous earth (lime) to be shipped to Anderson Smith Milling Company located in San Francisco, CA. 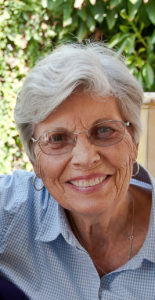 She attended a one-room grammar school located 15 miles from her home, in Flanigan, Nevada. Her family moved to Janesville, CA so Lorrel and her sister, Georgia, could attend Lassen High School in Susanville, CA. Lorrel attended one year of Junior College in Susanville then started working in a Doctors office.

She married David Roy McLaughlin on July 2, l955 and together they had six daughters. They moved to Reno, Nevada where David attended the University of Nevada Reno. After he graduated, they moved to Redding, CA where David worked as a Civil Engineer.

They moved to Bishop, CA in l966. Lorrel loved being a mother and worked at Bishop Union Elementary school as a classroom aide and later as Director of Food Services. She retired in 2002. She was active in the Church of Jesus Christ of Latter-day Saints and had many opportunities to teach the youth.

Lorrel McLauglin is a beautiful, spiritual and kind woman. She is a fine example of a wife, mother, and womanhood. We knew her for more than 25 yrs. and considered both she and David good friends. We pray that the Lord will bless her family and posterity and continue to… Read more »