While the Lower Owens River Project showed promise in the early rush of water down the channel, progress has slowed and conditions are trending in the wrong direction. The historic river restoration project is caught between nature and project management mandates, a stalemate waiting to be broken, hopefully, following this Wednesday’s public meeting to review LORP recommendations made by the Memorandum of Understanding consultant, Ecosystem Science. 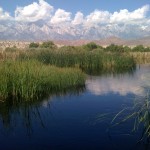 Those recommendations look very much like Ecosystem Science’s 2013 recommendations, with the addition of alternatives depending on what the MOU partners can agree on. The restoration is managed by the Los Angeles Department of Water and Power, monitored by Inyo County’s Water Department with some elements of the management dictated by the MOU. Changes to those elements require unanimous agreement among the partners, LADWP, Inyo County, California Department of Fish and Wildlife, State Lands Commission, Sierra Club and the Owens Valley Committee.

The 149-page Adaptive Management Recommendations doesn’t pull any punches, comparing the LORP stalemate to conflicts surrounding the Glen Canyon Dam, stating “conflict and mistrust prevent good decision making.” In essence, the project bears more resemblance to a canal than a river, with flows codified in the MOU, water quality degradation and tule overgrowth. Current flows were supposed to reflect natural river flows, but don’t. With a mandated minimum set at 40 cubic feet per second, the river receives far more water throughout the year than it would under “natural” conditions. With seasonal habitat flows set at a maximum of 200 cfc, the flows fall short of what Mother Nature would send down the river banks. The result is a build-up of biomass and a flourishing crop of tules that get water all year long.

The potential trade-off: The MOU mandates are rescinded in favor of a lower minimum flow paired with more flushing flows and higher seasonal flows and LADWP is allowed to increase the capacity at the pump-back station to reclaim water for the LA aqueduct. As it stands, water that exceeds the capacity ends up in the Delta, an area earmarked for water, but currently over-tuled due to more water than is required, according to Ecosystem Science’s document.

The consultants recommend that the 40 cfs base flow requirement be rescinded and flows follow the plan presented by LADWP at last July’s River Summit. The flows would drop to 25 cfs during the winter, peak as high as 220 cfs in mid-March, drop to 60 cfs through the spring, rise to 98 cfs in early spring preceding a second peak to 200 cfs followed by a drop to 45 in late September. LADWP’s concern is water neutrality; flows could be managed more “naturally” within the current LORP water budget, according to LADWP staff at the 2013 recommendation presentation meeting.

Currently flushing flows for the Delta Habitat Area are released from the end of the line, at the pump-back station. The consultants recommended scheduling the flows earmarked for the Delta at the Intake, just south of Big Pine, allowing the flows to benefit other aspects of the LORP.

Last year’s LORP meeting also focused on tule management, important to the development of a healthy warm-water fishery but currently running rampant, blocking both recreational access to and boating on the river and overrunning native grasses on grazing leases.  The consultants recommend the county and LADWP develop site-specific goals along the 60-mile stretch of the project, targeting areas for tule control. Ecosystem Science goes on to explain that flow management could play a major part in tule control, drying out the marsh vegetation during the low-flow summer months.

If 2014 was the tipping point of the LORP, as the consultants stated last February, predicting more fish kills, more tules and more biomass pulling oxygen out of the water, some management modification is even more critical this year.

The meeting will be held at 9 a.m., Wednesday, Jan. 14 at the Board of Supervisors’ Chambers in Independence.

Until the river flows match the aqueduct flows we will always have a clogged river. The LA aqueduct flow is reported to be from 400cfs to a max of 700cfs. Put that flow down the river channel and it would be a completely different story. It is okay with me… Read more »