By News Staff on January 9, 2015 in General Misc. Stories, Obituaries 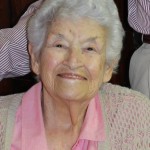 Sarg was born in Los Angeles , CA and graduated from Compton Hight School in 1943.  While living in Compton, she met her future husband of 68 years Gene Snyder.  Though they met as teens they agreed  not to wed until after Gene’s return from service in WWII.  The pair moved to Bishop in 1947 together with their best friends Marv and Ricki Tetrick,  during that time Sarg worked as an operator for  the telephone company and raised her three children.  She continued to work for the phone company until her retirement  in 1983.

In her younger years she was she was a member of the Junior Women’s Improvement Club.  She loved to do the Kankan and was an avid golfer.  After her retirement she volunteered  for hospice and she and Gene enjoyed traveling to Hawaii and their second home in Yuma Arizona.  The pair also took  part in an extensive trip through Europe  to commemorate  the 50th anniversary of D day.

While her given name was Florence Irene, the name  Florence, Flossy, and Flo were completely unacceptable, as anybody who knew her well could attest to.  If you valued your life, you called her “Sarg” a nickname given to her in her youth by a dear friend who admired her colorful vocabulary and its likeness to that of his drill sergeant.

In her twilight years, nothing became as important to her as her family; she was a constant presence in the lives of her children, grandchildren, and great-grandchildren all of whom will greatly miss their birthday phone calls each year wherein she would “sing” happy birthday at the tip of her lungs until you could no longer hold the phone to your ear.

She will be remembered for her hugs so tight you couldn’t breathe, her fantastic sense of humor, and her infectious  laugh that filled the room whenever she was around.  Though her great grandchildren would probably  argue that her “denture trick” was one of her best  qualities.

While she will be greatly missed by all who knew and loved her,  it is a comforting thought knowing that she is now reunited with her beloved son Dean.  The pair are likely smiling down upon us all from Heaven right now marveling over the fact that they “got in.”

Funeral services will be Saturday January 10, 2015 at 11: 00 at Brune Mortuary, 325 West Elm Street in Bishop.  Interment will be private at East Line Street Cemetery.

For those who wish, donations may be made in honor of Sarg to:  the Hospice of the Owens Valley, 162 Line Street, Bishop, CA 93514. 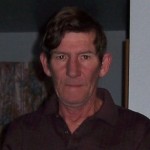 Born to Russell and Faye Charles in Franklin, Ohio on November 2, 1946, he lived in Garden Grove before settling in Bishop, CA in 1988.  He worked as a printer and was an active member of the Lions Club before retiring in 2010.

Survivors include his wife, Lynda, his sons, Robert and Russel, daughter-in-law Alicia, and grandchildren Trevor and Troy Charles.

No services will be held at the request of the deceased.