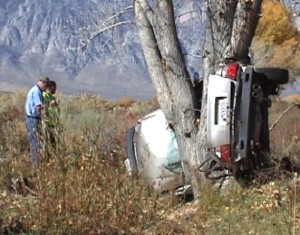 A 20-year-old Long Beach man, apparently visiting Mammoth Lakes and then on his way home, lost control of his car and died when the vehicle slammed into a tree just off Highway 395.

It was close to 11 Saturday morning when Rafael Contreras, 20, of Long Beach, was at the wheel of a 1994 Honda, southbound on 395 south of Mill Creek Road. The Highway Patrol said Contreras allowed his car to move to the left and onto the left shoulder. Officers said he turned the Honda to the right, back toward the roadway, and lost control. 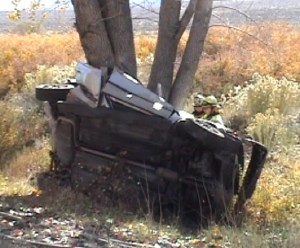 Services for Contreras will be held in the Long Beach area.

We work to provide daily news to all of the Eastern Sierra, in the tradition of Eastern Sierra News Service and the Sierra Wave. We bring you daily happenings, local politics, crime, government dealings and fun stuff. Please contact us.
View all posts by News Staff →
Museum Open on Holiday
Bishop Brush Fire Under Investigation
1 Comment
Newest
Oldest Most Voted
Inline Feedbacks
View all comments

I MISS YOU PRIMO 🙁