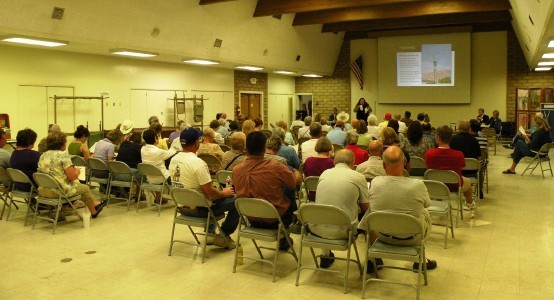 controversy which has roiled the County since the surprise decision by Judge Lamb was announced to the County Board of Supervisors several months ago that the new courthouse was to be built in Bishop. The result of this meeting, much like all the others, was yet another showing of overwhelming support for the new courthouse to be built in Independence as originally planned.

The story of Independence’s fight to keep the new courthouse is writ large as if from a page of the classic children’s story, The Little Engine That Could – “I think I can-I think I can. ” Residents from every community from north to south Inyo County have attended the public meetings and overwhelmingly expressed their support for Independence.

Independence has clearly been the underdog in the fight to keep the new courthouse. One reason for the outpouring of support is that there appears to be a genuine, familial affection and fierce loyalty throughout the county for the little town “that could”. Even relatively new residents in other parts of the county want it to succeed.

Judge Lamb has been confronted and literally lambasted at almost every meeting by angry, hurt residents who feel betrayed by his support for the proposed change to build the new courthouse in Bishop rather than Independence. Even so, he has remained stoic in the face of considerable anger, sharp criticism and blistering comments which have been directed towards him. When accused of being biased from the start of the public meetings, his response is “Objectively, I am trying to proceed in good faith.” It’s a hard sell.

Judge Stout on the other hand generally enjoys congenial, far less confrontational response from those attending the meetings. He notes to the crowd surrounding his table that “People in Inyo County don’t put the AOC’s definition of “access”, the AOC’s number one priority, in the same category of convenience as having an ATM machine within easy reach.” Stout notes that having court facilities by the jail reduces the security risks and costs of transporting inmates to trial as well.

Interestingly, Judge Lamb noted at his table that he stopped the practice of transporting inmates to Bishop for trial shortly after taking office out of concern for security reasons despite opposition from some in law enforcement. He felt the inconvenience to an officer attending court was outweighed by the greater interest of public safety. Inyo County Sheriff Bill Lutze, who has attended meetings in support of the courthouse being built in Independence, agrees with this rationale as do many other county officials from the District Attorney to the Board of Supervisors.

Inyo County 5th District Supervisor Richard Cervantes stated that the Board of Supervisors have clearly demonstrated their intent for the new courthouse be built in Independence through their actions in having millions of dollars invested in building the new jail and juvenile hall facilities there. He unequivocally stated, “I want the courthouse built in Independence. It is the County Seat.”

The problem with the “population-center” argument is that, if it becomes the main rationale and standard for capital investment and building of new governmental offices, buildings, and services, it would follow that the state capital of California would be in Los Angeles, not Sacramento. If the argument is “access” and “convenience” to the greatest number found in population centers, the choice would have to be made that Los Angeles would be the better location as the major portion of the state’s population lives in Southern California. Of course, it’s never going to happen.

If simply having a location and services always in population centers is the criteria and rationale for always building new courthouses in rural counties, it would also give credence to the saying that-“If “B*ll Sh#t” were white, Texas would be the skiing capital of the nation.” Many would argue that Sacramento in this case could challenge Texas for that title. Hopefully it’s a non sequitur…or is it?