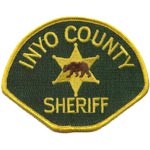 Carma Roper with the Sheriffs Department reports that 28-year-old Bernardo Ruiz Castro was arrested Monday and is being held in the Inyo County Jail on felony rape charges. Roper has few details to release to the public, but does say that the alleged rape occurred early in the evening Sunday, August 2nd. The victim is listed as a 17-year-old juvenile.

We work to provide daily news to all of the Eastern Sierra, in the tradition of Eastern Sierra News Service and the Sierra Wave. We bring you daily happenings, local politics, crime, government dealings and fun stuff. Please contact us.
View all posts by News Staff →
Whitney Region Leads to Another Busy Weekend for Inyo SAR
Bar Brawl Investigation Continues- One Officer Involved is Back on Duty