On November 20th at approximately 11:00PM Sheriff’s Deputies were dispatched to Lone Pine for a domestic battery between father and son. 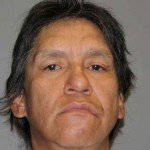 According to reports received the son, who was also the suspect, attacked his father while the father was sleeping.  The father was reported to have sustained serious injuries and had noticeable marks on his neck and face; he was transported to Southern Inyo Hospital for treatment.

The suspect, identified as 45-year old Lone Pine man Christopher St John, was discovered passed out inside the residence, and it was determined that he was heavily intoxicated.

Initially St John resisted arrest; however he was taken into custody and booked at the Inyo County Jail under the following charges:  attempted murder, battery with serious injury, elder abuse, and resisting arrest.  Bail has been set at $500,000.