By News Staff on January 26, 2015 in Entertainment/Local Events/Activities, General Misc. Stories, Public Event
– Information from press release
A Tesla‘s “Commissoning” team will be on location, at the new Tesla Supercharging Station located at The Lone Pine Film History Museum, Tuesday, Jan. 27, from approximately 9:00AM to 12:00 Noon to run tests and open the Charging facility to Tesla drivers along Highway 395. 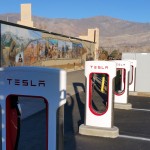 Additional stations are under construction at Inyokern and Mojave. Future stations are in negotiations so Tesla owners can travel the full length of 395.A Tesla Model S will be at the location for testing purposes through the morning and for the public to see after noon. 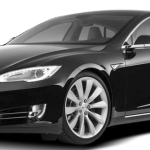 Tesla drivers on Highway 395 can now recharge for free while visiting one of America’s finest museums dedicated exclusively to the heritage of Western ”Cowboy” film making and then enjoy the tastes of Lone Pine’s many eateries.

Tesla’s business model includes building a network of fast charging stations — faster than any other electric vehicle manufacturer — along the major interstates around the country to enable Tesla owners to travel from city to city. Tesla offers the charging services for free, making the Superchargers a gathering place for members of the Tesla owner’s community. 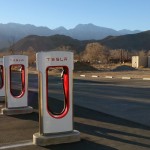 Landing a Tesla Supercharging station in Lone Pine is just one of the many advantages of being located along Highway 395. While charging your car – you can visit the Lone Pine Film History Museum and the city of Lone Pine. Located at the base to the Eastern Sierra’s highest point in the continental USA, Mt. Whitney – and the Alabama Hills, whose unique geological formations brought Hollywood studios to the area to shoot “Cowboy” films, are not to be missed.

Filming started in 1919 with a full-length feature film, The Roundup starring Fatty Arbuckle. The city is also an access location for Death Valley, The Ancient Bristlecone Forest, Eureka Sand Dunes and many other interesting American heritage areas along Highway 395. For more information on the new Tesla Supercharging Station and Lone Pine Film History Museum please see http://lonepinefilmhistorymuseum.org/Tesla or for Lone Pine – The Lone Pine Chamber of Commerce Website.

Mammoth Lakes, California: Home of the highest number of Toyota Tacomas per square mile than anyplace in CA! But I digress, it’s hopeful that, in the future, Tesla may develop a more modest electric vehicle for the masses, one that brings in a 20-30k price point.

Tesla is in the process of building the largest Lithium Ion battery facility in the world. It just happens to be in Reno, Nevada. They already have plans to build a car in the 35K price range. They have freed up all of their patents for other companies to use.… Read more »

In N Out doesn’t franchise. They own all their properties outright

I agree Ken, but Bishop will now probably have to pay for a charge station in the near future. I have seen Edison employees driving a couple electric vehicles in Bishop. I heard DWP can’t figure out a way yet to steal any more land for a power station.

Electric cars sound like a really great idea. But the reality is just not practical. Too expensive and limited range. Buy the time the car makers get electric power trains figured out, fuel cell power trains for cars will be the well developed. The same gas stations could have a… Read more »

While electric vehicles may not be practical for longer trips yet, they are becoming much more prevalent in the urban/suburban areas down south. Not everyone needs a car that is capable of driving all the way to the Eastern Sierra, (thank God!). Calling them “brain dead” is like looking a… Read more »

A Tesla will not make it to Mammoth from L.A. without a re-charge. Under perfect conditions, maybe Bishop. No delays, going slow. Independence is within range.

Trouble: you are right — they are the perfect yuppie car. The car for the brain dead.

A Tesla charging station and a good farmers market are 2 things Bishop just won’t get. Why not? Because they just don’t get it.

Does Bishop see a lot of Teslas? I’ve never seen one up here in Mammoth.

Ken, I see them all the time. Once again the future passes us by. Think I’ll go out and buy some oil lamps to light my house tonight.

I have seen three in Mammoth in the last 6 months. There is supposed to be an all-wheel-drive version coming out soon so I would expect to see more SoCal Skiers driving them up. You see them all over the place in SoCal. Especially Orange County area.

Ken, Mammoth has the prefect yuppie crowd for Tesla. It’s hard to get here with no place to charge them.

Trouble, We finally have something to agree on. Bishop was rated by Tesla owners as the number one rated place to put a charging station in California. Total screw up.

I think Bishop really dropped the ball on getting the charge station. To mule headed I guess!